What is going on with Pinticlimbs? Where is the once so hot and popular blog gone to? Is the blog you happily subscribed to turned into another semi-abandoned web space where every second posts starts with "sorry about the lack of updates..."? What's up with the guy that's been doing 8c's all around? Who is this Pinti dude anyway?

This next post might not answer all of the above questions, but the fact is I haven't written much in the past weeks (you know it's bad when your non-climber girlfriend urges you to get on it!). Contrary to what it may seem, there's been A LOT of climbing going down the past weeks, pretty much every day - as long as you count gym training as climbing. I do, myself, as my training can be really sick sometimes, especially lately when we've grown a bit stronger and are now doing some REALLY hard stuff at our wall (all thanks to our coach Roman - I have a blogpost on that in mind, so stay tuned).
But actually, I have been pretty busy with other things, so I didn't have much time for any rock climbing. The good news is my school is coming along just about perfect, and it looks promising about the driver's licence (yay :D)!
The two things worth mentioning at this point are the NLP bouldering league that went down on 10th of March, and hitting Bitnje with my sis' the other day.

I managed to claim victory at the 3rd round of NLP in a notably weakened competition (the senior team was cranking hard in Fontainebleau - oh my GAWD finally some problems I could do!). However, it was not easy - Gregor Vezonik was a tough opponent, and the other guys were strong as well! It was the first time I managed all the problems in qualifiers, and then I beat Gregor by just a move, so it was a bit of a cheap victory, but I was quite psyched nonetheless. I heard round 4 is on April the 15th - I think that's the day after my prom night, so I will see about attending it, haha :D

So as I said, I went to Bitnje last Sunday, I actually managed to persuade my sister to go climbing with me! She'd been hesistant to come along with me as her rock climbing level has gone down a bit in the past years, but I was keen to take her to some crags (I hope she will still be up for it!). Bitnje is a smaller crag in the north-west region of Slovenia, I love it, the style is very sustained in a slightly overhanging wall with an odd tufa and typical Slovenian limestone... The crag has about 10 routes in the range of 8a-8b so it's well worth a visit, although there's no harder stuff (but some projects!).

I sent two 8a routes I had tried two years before, both are absolutely brilliant and were pure joy to climb. I did a half-onsight of Che Guevara, 8a and did Silent Alarm, 8a second go that day. It's been a while since I've clipped quickdraws, and so it was even more of a pleasure, I felt pretty strong so I was going up those routes flawlessly and yeah... you know... the feeling of sending, being in control, it's so good! Should get on some harder stuff next time I go rock climbing (it's looking promising this weekend - PSYCHED!).

Some photos of NLP, it was a great event! See more here, thanks to the people who took them. 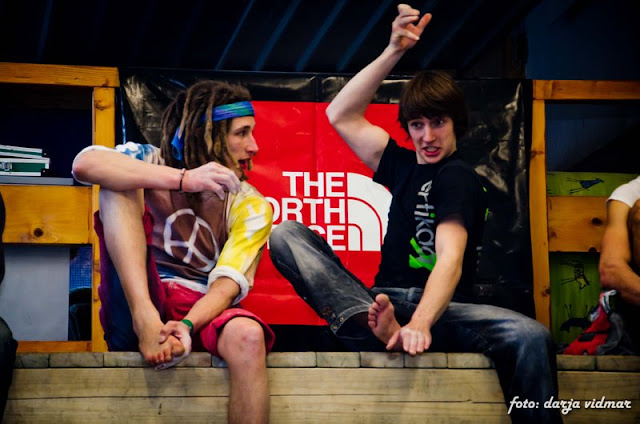 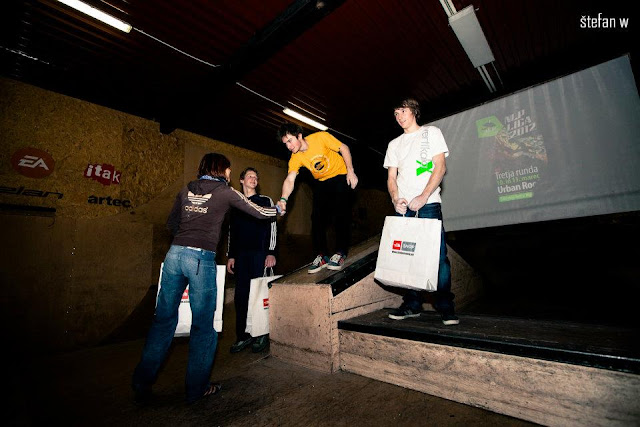 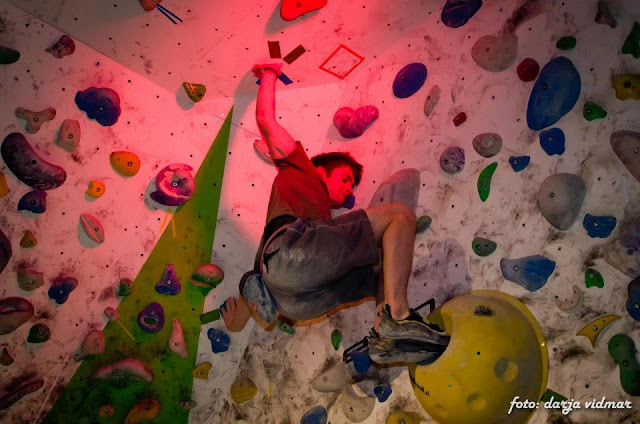 HA! So here we go with another blog written! Want to write more in the future (note to self: ALWAYS bring a camera)! Thanks for reading people, drop me a line in comments section if you feel like it!

We need some fresh sh*t!
Posted by Gašper Pintar at 3:31 PM 2 comments:

Email ThisBlogThis!Share to TwitterShare to FacebookShare to Pinterest
Labels: Bitnje, bouldering, NLP, other

I say, bolt this sh*t mate!

One more from the UK times!
Thanks a lot to Ethan for getting this vid!
This was my hardest E grade I did while over in Britain! Maybe you can't regard it as a proper trad route though, since it's actually a highball boulder (approximated to V6 higball in the guide - so Fb7a+). Luckily we stacked up about 10 pads below so it made comitting to the last moves a bit easier! Still didn't want to come off at the end :)
We had a great day out that day, we went to this smaller spot called Ina's Rock (Churnet area) with the intention to get on this one boulder/route, and the one left of it which is an even more intimidating line, called Cornelius and weighing a solid E8! That one was also done by Ed, Adam Bailes and a very strong dude called Dave Mason, he came along with us and it was quite inspiring to watch!

Ahh! What a great trip it was! Shout out to the Sheffield crew! PEACE!
Posted by Gašper Pintar at 8:27 PM No comments:

How I went to the UK I'm sat at home with this mug in front of me, with a load of memories from the latest trip waiting to be written down. Where to begin? I wish I was back there and still had a week left... It's amazing how things sometimes just take you on a full scale, completely blow your mind... Honestly, I love Britain, for long I've been fascinated by many things British: the climbing, people, the culture (I guess it has to do with most of us speaking English), so I really felt like going there once. I spent a week staying at my friends the Hamers, actually, there was a lot of people coming together for some climbing in the Peak District. A big part of the Ceuse 2k11 crew made it out: Ed and Sam, Ethan, Luke, Ted, Kitty... it was really nice to see all of them! A big shoutout to everyone, and especially to Ed, Sam and Denise for the amazing hospitality and making us feel like at home (and the hat, too!).

I got to see the Stanage Plantation, we had a great day out even though it was really windy. It was great to see Ed crush the mega-classic, Brad Pit, 7c+ (with the help of my shoe, ha :D)! I tried it but saw no success, but I can say those blocks are world class and climbing on gritstone is great... the rock is something I'd never seen before, it's all black in colour, I guess it's some kind of sandstone but with very big crystals which make for awesome friction (seriously, it feels like sanding paper!). Unique to Britain haha!

Since I mainly climb routes when I go outdoors, I was psyched to see Raven Tor, home of some very famous routes (even world's first 8c+, Ben Moon's Hubble). It's one of the few limestone crags of Britain, and I suppose it's quite old-school by now. Really, one can see why the Mecca of today's sport climbing is the almighty Spain (I wonder if they'd even bolt this piece of rock if it was in Catalunya?), but still, this place has history. A big, long and well earned history. Sadly, it was wet from the rain of the previous day (something that you're likely to have to put up with when in the UK), so we sacked the idea and spent the day eating fish and chips AND also doing some hardcore training on Ed and Sam's board (basically a small overhung wall in their garage, very fun stuff actually).

I was told I was lucky with the weather, frankly, I couldn't complain even by the euro standards: we only had one day of proper rain, and even that day turned out great with a BIG session at the famous Sheffield gym (the successor of The schoolroom?), The Climbing Works. The gym is really big and also it has a massive campus board! Proper British style!

Probably one of the coolest days for me though was when I first tried trad climbing (yeah, the proper one... placing friends and nuts and wires and all that). Since I had absolutely no clue about how it's done I took it easy at first, doing some HVSs, which would probably be about... maybe F5a or something? Towards the end of the day I was getting on some harder stuff and managed to do E1 and E2! The climbing was still in the F6 range, but it took a lot more focus to find the protection... and somehow I didn't really want to fall, even though I was... quite sure about my placements :D
For some reason that I can't explain I really liked this sort of climbing, placing your own protection puts the whole thing into a different aspect and you may find routes that would have been piss if bolted very intimidating and challenging! In fact, I took to it so much that I'd have loved to go back, but it was already my last day in Sheffield so now I'm only left with a small taste of it and some amazing psyche to try some proper hard shit! Also I feel like I could much harder stuff so I'm curious to find out how hard I could go! And also see some other grit crags, the one we went to is a smaller one called Lawrencefield and we actually got here because Millstone (a bigger one, where Master's Edge is) was super windy.


So I had to leave my friends but the trip was still not over, I met up with my brother who is on a student exchange in Cranfield, just north of London... I haven't seen him for a while so we thought a day out in London would be a good one! We're both quite into science and stuff so going to London, the Science Museum was an obvious choice! We got lost strolling through endless halls and I loved it, especially with a detailed insight into the exhibits provided by the upcoming great engineer by my side! BIG UPS BRO!!

All in all it was a great holiday, it was great so see all those people again, shout out to y'all! Cheers to Ethan and Kitty for the pics! See you soon I hope!
PEACE
Posted by Gašper Pintar at 3:09 PM No comments: