A few things happened that made yesterday kind of historical (for me):
- we broke one of the key holds in Obraz sfinge which makes this very historical, cult route now significantly harder and definitely ups the grade
- I completed a huge wall with no pain in my toes. I don't know what's going on, but this has really been a pain in the ass the last few years -> really happy!
- I went climbing in the Julian Alps for the first time and can definitely attest to their notorious chossiness.

So me and David went to try and repeat what is supposed to be the hardest route in north face of Triglav, Obraz Sfinge. The line goes throuh the center of the formation called Sfinga - the Sphynx. Originally given the french 8a grade, the grade now seems to have settled around 7c. Well, we'll have to write the books again (after somebody repeats in in the current state!).
I was very excited to have a go at this historical route, free climbed back in 1995, it's had many repeats up to now and it is considered a hard classic.
Also I hoped to summit Triglav, the highest peak of Slovenia, for the first time, but sadly we took too long on the route (I'm getting closer :D).

Anyway we started at 4.30AM from the valley, scrambling up Skalaška, an easy classic route in the middle of the wall. We reached amfiteater at about 9AM and started climbing up the left side of Sfinga (Kunaver-Drašlar) and traversed right via three short pitches through uncharted terrain (the most horrible choss of my life - it took us two hours to climb 50 metres). After reaching Obraz sfinge, we played around the crux pitch. I sent it on my second attempt, thinking it's about 7c. David came really, really close on his second attempt and then realized one of the holds cracked while he was pulling on it. He inspected it and the jug just crumbled away. Ooops?! I checked out the moves on top-rope while cleaning the pitch and I think it will still go, but it definitely created another crux and will make it at least 8a (!). I wasn't feeling like trying it more (I'm not sure if I can still claim my ascent :P) since we were kind of running a bit late. Too bad for David, who actually passed the move from the jug on his go, and then fell a few moves after, right at the end of the pitch - having sabotaged a potential third go, anyway.
So Obraz sfinge received an unlucky makeover and will further remain a testpiece, which is ok, since the young generations are climbing stronger and stronger.

At the top we took in the amazing views and made the leg-killer hike down. Pretty battered after 1000m of climbing (even if most of it is easy). What an amazing day out, and not a single living soul, except a few solitary goats. 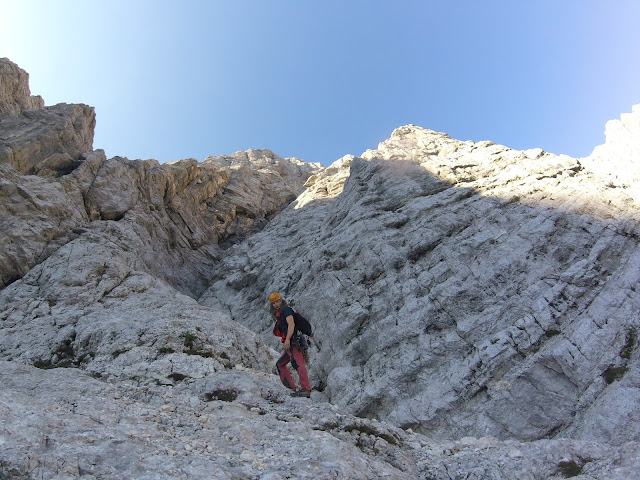 Posted by Gašper Pintar at 3:39 PM No comments: