Hello everyone,
some things worth mentioning have come up in the last week even though I've not been rock climbing since that killing spree day in Mišja Peč (hmm need more of that!).
So the coolest of them I think was my prom night despite being a little too formal and fancy and shit for the ordinary rock climbing dust-biting crag dog. I had to put on a suit and get all dressed up, and we danced, ate dinner&cake and drank champagne... but, it was a lot of fun. And we had a great party afterwards. I felt this os one of the things I shouldn't miss out on as it marks the nearing end of my high school years... keeping this fact in mind I think it's needless to say that there was some big words being said about what we are to turn into and how we are to become the foundations of our brighter tomorrow.
On my part, there was a lot of euphoria at the party and a continous wonder and praise to the beauty of my dancer. Here's a photo of us (shit resolution though, sorry) 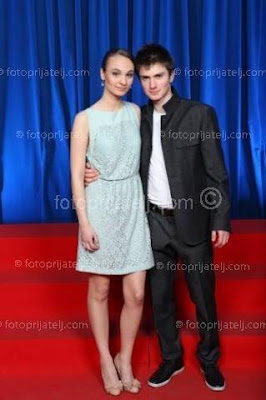 Now the bad news is that I won't be taking part in the first European Youth Series comp this year in Edinburgh. This was the team coach's decision which is supposed to be based on last year's performance in the EYS. I will not go discussing the details here as I feel I have to obey the authority and also I think changing anything in this case is out of my reach.
What I am pissed about, and will say it is that I think it's very unfair, and I feel let down by the youth team, my motivation for any more comps has just dropped a considerable notch.

On one hand, I am being told how much potential I keep, how I should keep training (well, training for comps) and competing despite the overwhelming amount of strong climbers on my team - and thus maybe leaving out things I desire just as much. Then on the other hand, I don't even get a chance to prove myself. If it was some other time I would maybe accept this without a fuss, but this year I really feel I've put in a lot of work at the gym and also that I am fucking strong (even though I have sent less hard stuff outdoors - in terms of sheer numbers only).
I think what this is leading up to is that at the end of summer, after I'm done with my matura exam, I'm packing my bags and leaving for some distant place with a lot of rocks where things will make better sense.


Anyway, things are looking as promising as always in general. This weekend, it's time for the our own Boulder World Cup in Log-Dragomer. A lot of my friends are competing here and I really, really hope they crush it! I might get a day out on rocks, too!
And also, in regard to the above ranting, even the Youth Climbing team is not as bad as I said - we're going for a short three day rock climbing trip to Tuscany! Wheeooo! Psyched!

Stay tuned for an update on all that! PEACE

p.s. and my brother is coming home for a short while next Wednesday! Should be fun!
Posted by Gašper Pintar at 7:50 PM No comments:

Email ThisBlogThis!Share to TwitterShare to FacebookShare to Pinterest
Labels: comps, other

Yo people,
I was out in Mišja Peč yesterday, I've done a couple of routes and thought I should write a post! Also, my sister, I think she might actually be getting keen on some rock climbing again!
When we were warming up, I got her on this superb 7a called Jumbo which we both really enjoyed and she almost did it. Afterwards, I had a warm up go on Tekila, an 8a I tried a few weeks ago but messed up the crux, but didn't really care. I was saving my power for the goal - Nočna kronika, an awesome 8b in the center part of Mišja with a quite bouldery crux (actually, two cruxes and a rest between). This time, I fired it off first go, which was fourth in total. Not bad! Since I was feeling strong, I thought maybe today was the the day to finally do Pikova dama, another majestic 8b that has resisted my attempts for some time now (I will not even say how it's become just a question of luck and mental war - I could have easily sent it earlier). I climbed up to the final move with little trouble, but kinda pumped out - the top is a real heartbreaker, for me the definite crux, it involves some super small crimps on a very exposed slab.
I didn't really care though - I suppose I'll get it when the planets align or whatever :)

We still had some time left, so I tried Caffe Expresso, an 8a+ just left of Nočna Kronika with a really hard, intense start (maybe the first ten metres or so) which is followed by an easygoing line of jugs up to the top. I quickly came off in the first try, but I did check out the moves and all, then took a bit of rest. After some time, I focused up, went mad and crushed it!
I'm pretty psyched about yesterday - besides the sends, we had a fun day. There was a lot of people (haven't seen the place so crowded in some time), a lot of friends and perfect conditions for climbing, it was cloudy with a bit of wind, not cold though.

The lame thing though is the parking issue the villagers of Osp sparked up. The usual parking spot in Mišja Peč is now closed due to the locals angry with people who are illegaly camping around the crag. I hope this will soon get settled, myself I'm unhappy with the parking becoming closed but I understand the dissatisfaction, I actually find the situation bad as well. The people camping below the crag and in the parking are leaving thrash and toilet paper around the place and it's really uncool.

So, we have to keep this mind: take the thrash with you and respect the local ethics of climbing and access. Rock is finite, let's keep access infinite!

Peace out to y'all, thanks to Matic Obid for the tape, big ups to Vezi&Škofla, we'll be back :)
Posted by Gašper Pintar at 11:36 AM No comments:

Adam Ondra has done it again! Yet another time, the climbing world has been left in awe admiring the climbing of who is (I think this is quite fair to say) the best sport climber in the world!
Yesterday, Ondra was the main star of the sixth International Mountain Film Festival Domžale and the slovenian climbing scene flocked to see the new feature-length film (starring Adam Ondra alone) and listen to his lecture. What we saw was a true testament to the progression of sport climbing and the embodiment of dedication, total comittment and unstoppable hard work (of course coupled with amazing talent).

First off, the film (The Wizard's Apprentice) is awesome. I don't think it would be appeal to a non-climber, but such is the case of almost any climbing movie. For anybody who's had a few days of rock climbing, it's almost a must-see. It will definitely open your eyes to how much has been done in the last ten years, where Adam Ondra has taken our sport and how far away from the actual limit (if there is any) we might be. Just consider that Adam Ondra has had an almost linear curve of progression ever since he started climbing, and he doesn't seem to be slowing down, either. Not that he would like to, anyway. This guy breathes, speaks, lives climbing.

He's unstoppable. And the way he looks at his own climbing and improving should be a big point to consider for all of us, mere mortals. He's never looking for excuses, inflated grades, easy ticks, peer acclaim... Brave and humble has become the synoym, but in Ondra's case you will see it is completely justified. What drives Adam Ondra is simply the will to go harder, bigger, further.
All of this became obvious in the lecture he gave after the screening of the movie. His show was not the best I'd seen though, I guess he hasn't done much of it yet - well, in no way I'm going to say that he should stick to the climbing alone! It's just that for those who follow climbing news websites, a lot of what he said was not new, or revealing. I was kinda hoping he would clear up some other things, there's a lot of stuff he could go about, not only showing us his hardest ascents (well, some of them - he has a big selection to choose from). I suppose he's not so much of a showman as some other people are, but hey - do you need that if you're already known for being the best? I think the best moment of the lecture was actually at the start, when he came up to the stage said hello, told us he'd been to Kotečnik and that he'd onsighted Iluzija, 8c. You can tell people were left speechless.
That's a bit like Jerry Moffat onsighting the hardest french routes, or winning a game of chess versus Garry Kasparov in three moves.

In any case, it was very good having Adam Ondra in Slovenia again (note that he's probably the guy with most hard ascents in our crags), it was most inspirational and psyching, one simply cannot believe how good at climbing he is. I mean, it's like, you know that he's super good, and every couple of weeks you hear of another 8c+ onsight he'd done, but hearing all that packed in 3 hours along with some superb footage in the movie... yeah... AMAZING.

Go watch the movie people, you will not regret. And get off your bum and go TRAINING! There's so much of room for improvement still left in everyone of us. Your hardest redpoint grade is just a number, nothing else. Go out there and rip it!

Meanwhile, to me the best vid of AO on the net. MUST SEE!


It's looking promising for some rocks this weekend, LET'S GO!
Posted by Gašper Pintar at 5:05 PM No comments: