Heading to Entraygues proved to be a great decision! It's a crag situated in one of the valleys above L'Argentiere. The rock is supposedly gneiss, I'm not a pro in these things but it's definitely a lot different than Ceuse! It's more like granit I know from bouldering in the Swiss, and it's great, super sharp and bulletproof hard. There's a lot of chipped holds but the sika is mostly just in places where big flakes could rip off.

The ambiance is amazing, high mountains covered in snow and perfect blue sky. It's really nice for camping as well, we set up our tent (thank god for the 2 seconds) in the field and it was  ok, and there's a small river where you can bathe and drink water.


I was a bit sceptical before heading up there as I spent a day in Entraygues last year and I didn't really like it, I thought it was too short, overhanging, crimpy and bouldery for me to send anything.
I am not sure why it was different now but I was SOO psyched to find out I can actually climb here, actually, the first route I did was the 8a that I couldn't even do the moves in last year. Hahah! From then on, me and Izi were freaking out like dogs on acid. Each day we sent some hard stuff, and it was all happening in this "chain reaction" style, we always sent right after the other.
So here's the ticklist:
Sunday (with a slight hangover from Briancon world cup party)
-Le sika karai de rika zarai 8a
-La tordeuse de melezes 8a (only for Izi)


all within a few tries! For the last 8b we had to take the professional approach as we were already tired, so we went back to the car and made couscous for quick carbs and some coffee for the energy shot, then went back and sent!


We are now in L'Argentiere watching the youth team in their boulder comp. Tomorrow we should be heading back to Ceuse for the projects! Syked man! 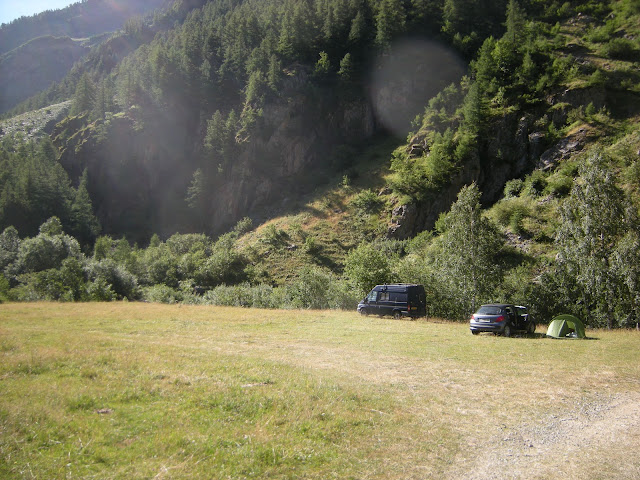 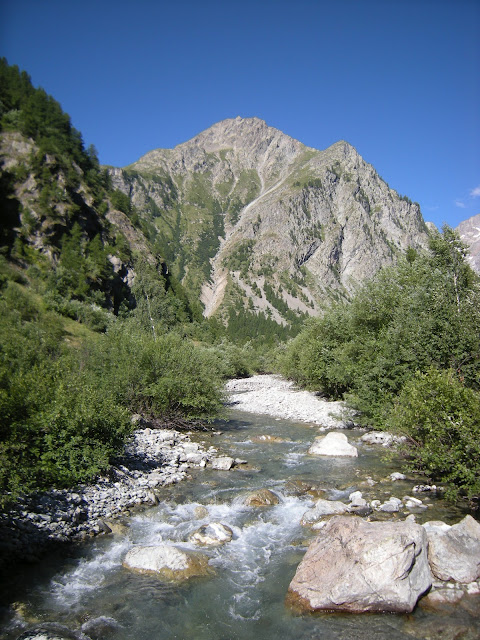 Posted by Gašper Pintar at 9:38 PM No comments:

What's up people just thought I would make a quick write-up! The first week of the great trip through France has passed already and me and Izidor are having a great time! We decided to go to Ceuse first to get in a bit of shape as the crag is perfect for this, the one hour walk and long sustained routes are great to gain endurance. We tried some hard routes but only sent up to 8a+. I did Rat man, 8a+ second go, Bouse de douze 8a flash and L'ami caouette and Les colonettes, both 8a on redpoint. I am happy for the last two because I had tried in previous years but always thought they were too crimpy and brutal for me... so this year I first cleaned up what was left and then tried Arque type, an amazing vertical/slabby 8b in Berlin. I got really close in second attempt but then I was stopped by some really shit shoes. We plan to go back in a few days to get on some hard routes like Dures limites and L'arcademicien. Izidor wants to work on Bah bah black sheep, a desperate looking 8c+ in Biographie sector.

Like always, Ceuse was awesome. I am impressed by the crag time and time again, the ambiance, the routes and all the people coming together... No wonder Chris Sharma once called it "the best". He's back here, actually, to work on a 9b+ project in Face de rat sector.

Yesterday was a rest day and we went to Briancon to see the finals of the world cup and meet our friends. The finals were slightly boring, especially the women, but the party after was good fun. Right now we are in the Briancon camping and we plan to spend the next few days in Entraygues, then back to Ceuse to wrap up the chapter... the next will be Gorges du Loup in August. I am psyched for that as there will be a LOT of people from everywhere and surely it will be super fun!

No climbing photos yet, just some random impressions...  Thanks for reading, take care and climb hard everybody. 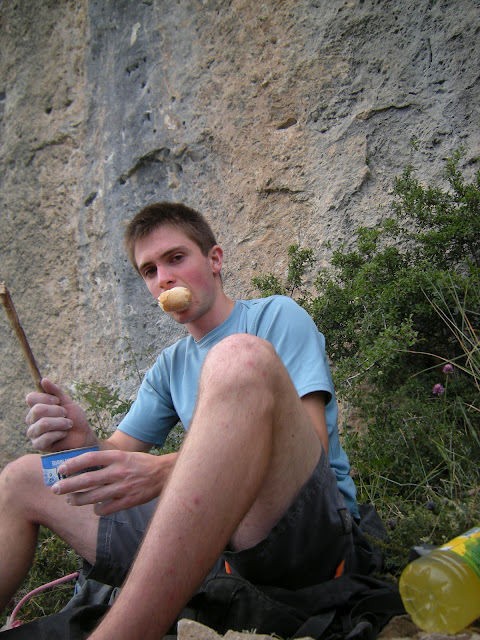 Posted by Gašper Pintar at 11:30 AM No comments:

Yo!
Right now I am really busy planning an upcoming trip with my friend Izidor Zupan. We are leaving on Monday for about a month of climbing and exploring in southern France and maybe some other places. We have only vague ideas about where to go, but we will probably go to watch the world cup in Briancon and maybe do some climbing in Ceuse/Ailefroide before that, then we want to spend some time in the amazing Gorges du Loup which is a place that I've been to before but only for a short time, and there is a billion of hard routes so we might just get stuck there for a while...

Besides that there are some other crags we might visit, we were even planning to go to Austria first (Zillertal, Schleier Wasserfall), but I think we might do this later or some other time.

I am open for some suggestions or any betas/guides/topos/instructions on possible good crags! Please feel free to drop me a line!


I am amazingly psyched for the trip, every summer in France so far has been an absolute blast and always a big adventure. Considering that this time Izi is coming along I think it will be no different :) I hope to get some good sends, even though I haven't been climbing much lately.
After I came from the EYS in Linz, I had a week off without climbing which was great for some rest and a bit of a change. I thought I would return really strong and fit, but it seems I got kinda lazy during the week so when I went climbing to Skedenj on Wednesday I felt like a sponge.

The pump in my arms was overwhelming and I got tired really quickly. Luckily, I got the chance to return yesterday and that's when I managed to finish off the route I tried on Wednesday, Sežana 32149, a stamina monster with some funky moves which weighs in at 8b.
I was happy and relieved because after the first day I was kinda depressed about my shape. But now it seems it will be ok. I'm sure I will get even fitter when on the trip, especially if we're going to Ceuse... Might be a good place to start off :)

I'll try to post some updates from the journey. I am bringing the camera, too :P thanks for reading people!

THE TRIP PEOPLE!!!!!
PEACE
Posted by Gašper Pintar at 1:17 PM No comments:

Yo!
Last weekend I was part of Slovenia youth climbing team which took part in a European Youth Series competition in Linz, Austria. This was my first european youth comp this year and thus I was psyched to perform well, to prove that the training has paid off.
Once again it turned out very successful for SYCT. We won 4 medals (Domen Škofic 1st, Anže Peharc 2nd and Sergej Epih and Tim Unuk 3rd). I placed fifth in the junior category and I'm quite happy with the result!

The competition was HOT!!! The climbing wall in the Linz Kletterhalle is pretty amazing, it must be at least 16 metres high and it's overhanging in most places. I was excited about that as I knew the routes will suit my style.
I am used to climbing in the heat because our gym is a real inferno in the summer, but this was even worse. I think I drank 4+ litres of fluid through the day and was literally soaked after each route. I saw people putting ice on their heads and all, it was that bad!

The first day we did the two qualification routes. I was placed third after the first route which gave me a big confidence boost for the second one. The routes were both quite the same style, just endurance climbing on good holds, the second one being a bit more techy as you had to smear on no footholds against the wall on your right. Still it was up to my liking and I was seemingly not getting pumped that much so I wrapped up the qually day in fourth place with a really good feeling for the finals.

The final route was not much different - just a straightforward blast up the contionus overhang with no really hard or tricky moves. I fought my way up, trying to rest a lot to be fresh for the overhang, but I came off just before the lip where a big volume offered another rest. Domen beat us by a fair amount of moves so congrats to him and also to Sergej for the third place and getting almost naked in the kletterhalle.
I think the routes in EYS comps were always my style. When you enter the senior competition (world cups etc.), things get MUCH harder (in terms of individual moves) and I feel this is my weak point.

The comp reminded me what they're about. It was great to meet friends again, feel the excited atmosphere before the climbing and so on. I was psyched to hear what other people are planning and instantly there were new ideas appearing :). It was really fun so I'm psyched for some more comps, but now that the summer is in full swing, I am being taken over by the endless possibilities that freedom and a driving license offer. A big climbing trip in the direction of France or Spain is being planned, but first I think I'll be escaping the heat and have a few days off in Bohinj. And maybe finish off some proj's in Bohinjska Bela!

Peace out to SYCT, all the finalists and everybody who competed in Linz. We are one special community but one that I love! 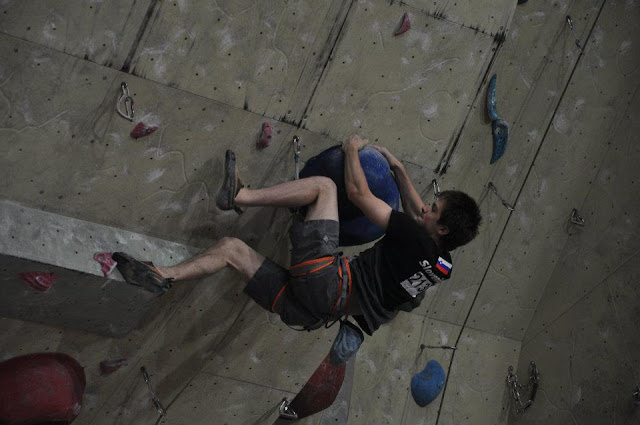 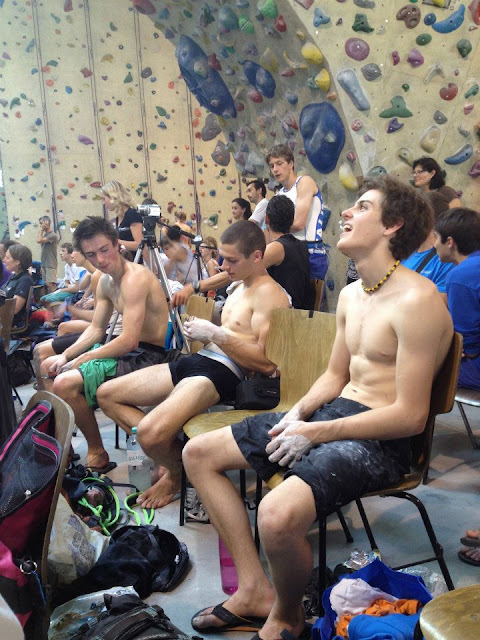 Posted by Gašper Pintar at 3:23 PM No comments: