Hey all,
I'm happy to present to you the promised footage of my ascent of Privid, 8c, back in September! Big shoutout and massive thanks to Tomi and Domen for the shooting and editing and Eva for giving me a belay :)! I hope you enjoy it! Maybe we'll make more in the future (if I will send anything, that is :D). It was a fun process, from first trying the route to putting together this movie. Makes me long for summer again!

Also, I'm proud to be able to say that I've been granted my first official sponsorship! Iglu Šport, the leading outdoor gear supplier in Slovenia with some 20+ years of presence in the market will be supplying me with my favourite climbing shoes' brand, La Sportiva. This has been wishful thinking ever since I've started climbing a lot (and thus using lots of shoes). Most of the time I've had to compromise between my shoes of choice and what I could get at the store/quality of the shoes. La Sportiva simply fits me best (especially the heel - other shoes are usually fine except the heel). I'm so psyched on this, thanks a lot to Iglu Šport :)

I'm off for a session at the gym now! YEAAA
Posted by Gašper Pintar at 8:56 PM No comments:

A day in Mišja Peč

Yeah so the news spreads fast through the social networks, but still, today made such a nice story it deserves a post here.

I was lucky to witness one of the few proper low gravity days in the year. Conditions were perfect, sunny with a slight breeze which made even the polished, worn-out limestone feel sticky. It wasn't crowded, actually there was a bunch of people you'd know and that was it. Everybody was going hard at their projects: Domen Škofic impressively finished off his projects, Sanjski par 9a and Človek ne jezi se, 8c+. I've seen him cruise both routes and the guy is just on a different level! Good sending in your Spain trip mate! Kruder sent the long-ass Vizija, 8c which is impressive as well, he cruised it because he's really strong (only sometimes gets pumped). I was getting on the line next to it, Karizma 8b+ (a bloody hard one, too!) and made some good links which is psyching me up, I could definitely feel the progression and it will go down next time, I'm pretty happy cause I didn't feel too bad after a month of very little actual climbing. Jera Jelenc ticked Samsara and so did Jernej Vidmar, congrats to both! All in all it was so nice seeing people tick and there was a great vibe in the air. Thanks to everybody for the vibe and Luka, Sabina, Kruder and Aljaž for the company. Peace.
So relaxing after a few weeks spent in the cold foggy Ljubljana! I'm hoping for more days like this it's really all I need! Trying hard high above the deck in perfect weather... it's what makes us tick! Despite the psyche we all feel about the new climbing gym, Plezalni center, it will always remain only an imitation of the real thing. It's good to get a few days like this every now and then... if you're doing it all the time you don't even notice it but lacking it makes you appreciate it so much more when you finally get to do it :)

Peace out and have a good week everybody. Hope to see you all at the crag soon :)

Posted by Gašper Pintar at 8:52 PM No comments:

A month of competing

We are only days away from the opening of Slovenia's biggest climbing gym, Plezalni center Ljubljana! In the last month or so, I've had the chance to participate in setting the routes and boulder problems. We started when the workers from the Nubs wall company were still putting up the walls and now we've still got some 30 routes to go until all is set for the grand opening next Tuesday.
Seeing it progress from a huge building of only bare concrete walls into a full-scale climbing gym full of colourful and exciting climbing routes has been making me more psyched about it every day. I am sure there's many climbers out there feeling the same, we can't wait for it to open and we get down a proper training sessions! And a MASSIVE shoutout/thanks to all everybody who has invested or helped with the gym, above all Matjaž&Matjaž, David, Nina and everybody else, for making the dreams come true for all off us. I jumped on the train rather late but I'm happy to have shared my part! It's gonna be HUGE :D 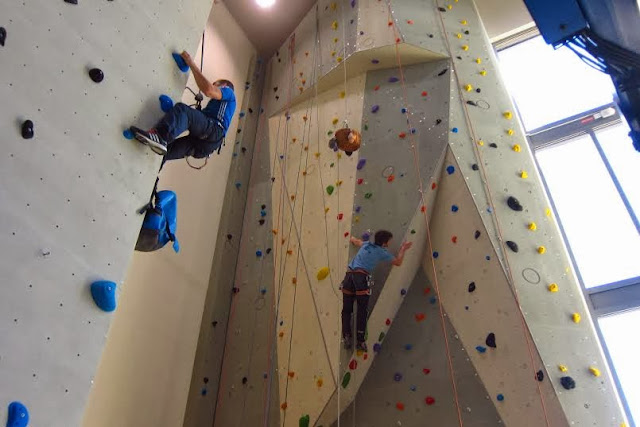 So it's been a hectic last month! The setting at the Center has been loads of fun and I've tried to spend as much time there. I haven't been out rock climbing which is a bit of a shame but I'm kinda planning a little trip out to Spain which I am so hopeful of, provided that everything goes well with the exams at uni I should have three weeks off in January so I could get away... Time to commit and get things done :D!

I have, however, taken advantage of the good shape I've had since the hardcore climbing summer and took part in a few competitions. It was cool to do it after a period of no competing, my approach has changed a lot since I haven't been training for it specifically.

I found that no matter how mentally strong you are as a serious competitor (something I've always felt pretty confident about), doing a competition with literally zero preparation for it does change your perspective and the pressure you feel. On the other hand, I did somehow feel that my ascents outdoor do have some ground in a good physical shape and thus automatically had at least a little expectations (and felt appropriately disappointed after having fucked up in two comps).

Anyway, here's how it went:
last week of October we had nationals in Tržič. I placed fourth in a slightly weakened competition (some people went bouldering to Macedonia :P). I gave both routes a very good go, but I think they also suited me well being more endurance-y. 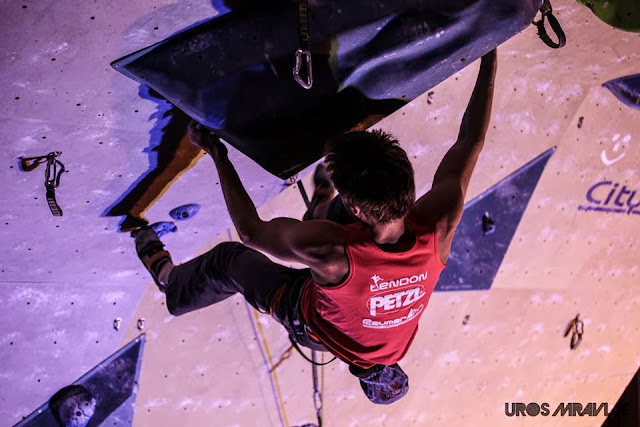 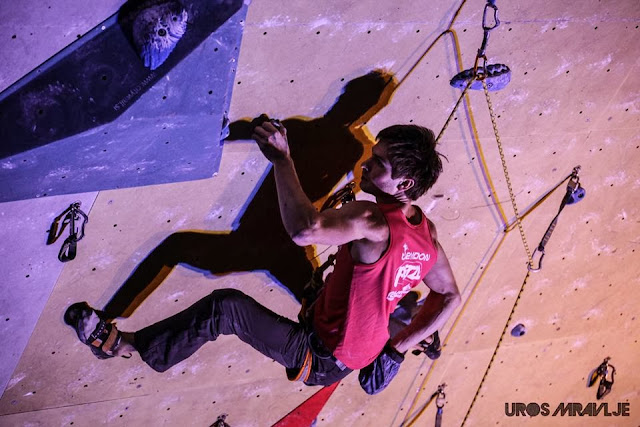 next were the nationals in Škofja Loka. I barely managed the finals but then fucked up proper, didn't feel too motivated either :/ good thing is I didn't feel much frustration.

Next up and the main goal was the World Cup in Kranj. It was the first WC I ever did and after having a really good run in both qualification routes in missed the semifinals by a narrow margin of one place. It would have been nice to be in the semis but above all I was super content with a result that I'd never expected. I think the routes really fit me (I was surprised, I expected them to be much much harder) and I had this good feeling which made it all easier. This is the problem with comps... in route climbing outdoors you may have some good or bad or mediocre days and it will all even out in the end... In comps your performance should be peaking on that exact day, or even hour. Apparently I  got lucky with that this time :)

Last was the nationals in Kranj. I sucked in both boulder and lead and it was kinda shitty. But overall that's 2 out of 4 comps that went pretty good :) Big ups to Slovenia climbing team for having me on for the WC, big ups to everybody in the competitons, my friends from elsewhere who came to Kranj and everybody who cheered on us!
Who knows what next year's season brings now that my ambitions have grown slightly again... I'm better off training now... HAHA :) not until Plezalni center opens its doors :)