Hey!
Today I had a day at Osp with my friends and gym teammates Sergej, Urban and Jure. Osp is a classic venue, slightly more old school than Mišja Peč, with less harder lines but equally enjoyable lines. The routes in the upper sector are particulary nice, they're all very cool lines on compact rock with clean features, crimpy, sustained and technical... the way we like it.
I felt quite tired from last day's trainings (we're now really in the gym training grind!), so the initial plan of doing all the three hard lines (8b and two 8a's) on the headwall was sacked quickly. After warmup me and Urban got on RKC, a route that was a project for a long time (not sure for what reason?) until Klemen Vodlan sent it last year and put it on the ticklist at 8a. Rumour has it the name is an abbreviation in hommage to the one and only Poden coach, the man behind the myth, the almost cult of personality master of the Škofja Loka gym, Roman Krajnik. Enough said, the route is a really nice addition to the wall and features really good, sustained climbing... Go out and do it people!
Urban almost did it onsight (I did it third try... had no luck on flash, messed up on second go), but the winner of the day was definitely Sergej who did it second go along with doing Zadnja skušnjava, also 8a, in second go!
It was a cool day out with friends and spotless sunshine... good to break away from the routine! It's a shame I had to give up on doing more routes because of badly sore fingertips and toes! Hate it! Anyway, back to the gym, ladies! The psyche for indoors is at an all-time high! VENGA! 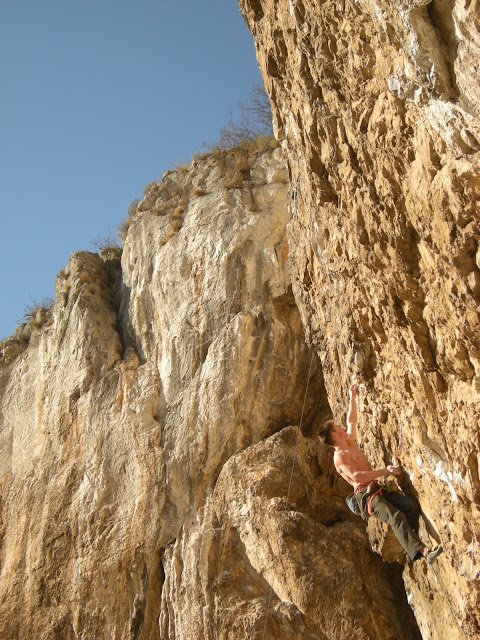 Peace y'all!
Posted by Gašper Pintar at 9:40 PM No comments:

Email ThisBlogThis!Share to TwitterShare to FacebookShare to Pinterest
Labels: Osp

Hey everyone!
The rest period has come to an end! It's time to go climbing again! First of all, I wish everybody reading this a happy, healthy and successful New Year 2012 and I want to say a big thanks to all of you who'd been reading this blog. The reason why I started keeping this place is because I felt there might be some people who would like to know what me and my friends have been up to. I have to admit having people come to me and tell me they'd read this or that or how they liked some post felt really cool, and I hope to keep it this way. Of course, it's the places you go that makes it thrilling and interesting. Not much can be said about the daily gym routine, but still I don't see it as some sort of necessary evil - training can be a lot of fun, even though it used to get frustrating for me, sometimes.
To sum up, in the new year I would like to, above all, get stronger (and feel the progression). I think this is key to keeping the confidence and also keeping up with the rest of the competition scene. I hope to make the most out of the days we'll be spending in gyms, because I am aware that sometimes I used to get fed up with the grind and just wanted to go out rock climbing. I would like to keep the right balance between training and going out climbing and also balancing climbing with my normal life (this means school and some other stuff I like to do). The first half of the year should be quite busy with all the stuff going on at school (I am finishing high school and doing the big exam at the end), getting a driver's licence, training etc. I know in a couple of weeks I'll be dying for a day in Mišja Peč (right now I'm still under the influence of the unforgettable Spain trip).
After that, who knows? Going somewhere to rock climb is probably on top of my list. If I'm going to do competitons as well then it'll be hard to fit it all in, but in any case I'm beyond psyched for another kickass summer. I have some vague ideas and plans right now already! The trip never ends :)
And then, in autumn, enrolling in university? I suppose so. I feel this might be a big change to my life. Well then, bring it on!

The time we spent in Spain was just amazing. Perfect weather, perfect climbing with a lot of friends... I guess it couldn't get better than that. In the days after the last post we went to El Pati two more times as we were stunned by the hard lines that we got on, I tried a route called Dos por trenta, 8c or 8b+ and together with Izi and Gregor we worked out some moves, so I am psyched for the future return trip! We witnessed Domen's impressive onsight of Kalea Borroka, 8b+, Urban and did it on first redpoint, Gregor sent Migranya profunda, 8b+... there was a lot going down! I had a really good onsight attempt in Pati pa mi, 8b, so I think the 8b OS mark will be reached one day even by me! On 31st I met up with my friend Ted from England who was part of the 2k11 Ceuse crew, it was nice to see him again!
We also had a pretty cool party, but last year it was actually much more crazy. This time I was actually psyched to go climbing on the 1st, and it turned out really cool. We spent a day in one of the smaller sectors, most people were just lying down chilling in the sun, while I did a couple of routes, not feeling too bad at all.

The Spain trip was soooo good... can't believe I'm at home right now! This should be done more often! VENGA!
p.s. Thanks to Domen, Miha Popovič and Gregor for the photos. Keep it real dudes!
Posted by Gašper Pintar at 7:01 PM No comments: