There's a lot to be said about why certain humans like to indulge from time to time in some of the good old fun of the second type. I now acknowledge I do belong in the said group and since then every time I feel  the impulse of doing it, it's become easier to understand. Sometimes a little bit of masochism will go a long way...
Most of the time I'm pretty keen to sign up for different more-or-less purposeful type 2 adventures. Having been raised by enthusiastic cavers it was inevitable I would once change my bearings and go down instead of up. I have spent vacation in my childhood wandering around the Julian Alps with my mom while my dad was exploring underground and thus I have always considered speleology as a logical, natural activity. The Slovenian karstic landscape is littered with caves of all dimensions: big caves, deep abysses, huge caverns with a paradise of unique limestone formations. The exploration of caves follows a hundred year old tradition that has started to blend with the extreme endurance challenge as deeper, more technical caves were explored.

Fast forward 15 years; Matic from Ljubljana's DZRJL  persuades me to come with and "do some free climbing to save bolts" in a cave named 'Trubarjev dah' undergoing exploration in Pokljuka. After we descend to -600, we enter undiscovered sections of the cave and advance further. We bivouac the night at the cave floor and then jumar out on the fixed lines the next day which feels like a neverending nightmare. With a biceps that's hurting as if I'd just spent a week on the wall, I swear to keep away from any caving in the future half year, but as we exit and with every passing minute, the type 2 fun effect kicks in and I secretly start to like it. It's a pretty simple way to go for a full-on adventure.

After six months I'd already forgot the pains and hard work of caving and Matic suggests I should join in the expedition to 'Renejevo brezno' I am stoked! The cave is among the deepest in Slovenia and countless trips spread over 20 years have gone into exploring it, and I well remember the excitement when the DZRJL members were about to hit the -1000m mark in it. More exploration followed culminating in a major expedition that involved over 30 people carrying gear for a diver who explored the end syphon and eventually reached the -1300-something mark. This behemoth of a cave is far from explored yet, though - under the surface of the Julian Alps in Kanin region lies a swiss cheese-like network of tunnels where rain water carved it's way following the path of least resistence towards the valley floor. Only the water knows the passage downwards, but there is considerable draft through some sections of 'Rene' and the guys are mega psyched to find the continuation. It is an adventure, for science, for fun, and for the indescribable transformative experience that settles in when the sun warms your face again... 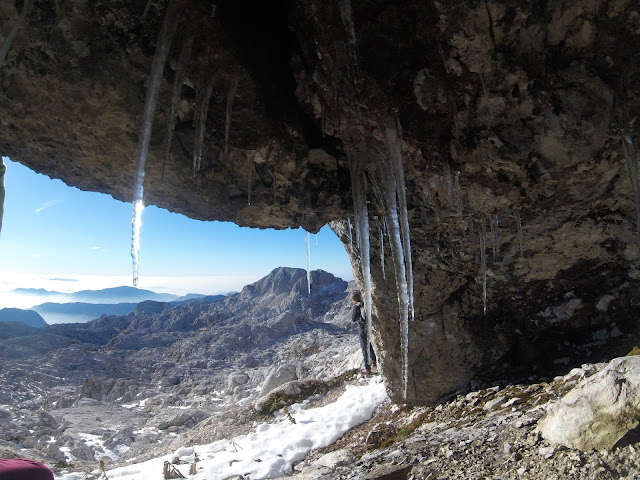 I was part of the four-man team that carried supplies for the other, exploratory team that was going to attempt to find a passage further. We hiked to the cave on a bluebird Friday morning and after savouring a little bit of the nice breeze and still-warm sun, descended into the heart of Kanin. 700 metres of pretty much straightforward abseiling on fixed ropes took us to the first bivouac. Soon after, meanders and tight passages started, where the heavy haul bags slowed us down considerably. Some of the narrower sections were quite tight, but nothing too serious, and honestly the little boulder problems, funky squeezes and little free-climbing sections make it really fun (definitely more fun than hanging off a rope). I think caving essentially has never been regarded as a sport (in the sense of what climbing/alpinism is) so the focus is never on how one will pass certain sections, but rather where they will take you to and where the cave continues. Thus, anything goes and when necessary, cavers will use explosives or a chisel to make an unpassable section go (no strict ethics here).

After a considerable 14-hour effort we reached the second bivouac, ate a hearty dinner and passed out. Life in the cave has allowed me to better imagine what the World War one looked like, because I feel Rene well resembles an Orwellian picture of lying in a muddy trench. Most of the time it's pretty miserable, but as the saying goes, one gets used to everything, and nobody really minds it in the end.
The next morning we descended to as of now deepest point in the cave, the aptly-named Copacabana where an underground stream empties into the lake that then dissapears in a syphon. Then, we started to reverse the difficult passages from -1200 to -750 to reach the first bivouac, where we spent the second night. On the way we ran into the other team that came blasting past us, psyched to spend the next six days in the cave :)

Lastly, on the third day, 750m of ropes separated us from the surface. Minutes felt like hours and every shaft looked alike as we inched upwards in what seemed like a slightly delirious bubble of thoughts and repetitive jumaring motion, interrupted by the occasional "Rope free!" from your mate above. Even though it felt like a real drag, I made the journey in only five hours - a considerable improvement since jugging the previous time in 'Trubarjev dah'! Suddenly, I felt a hint of breeze on my cheek. I looked up but couldn't see any light, but I knew we made it after all. Another 20 metres and the final tight squeeze and a blueish, piercing light of the midday sun shone on me. I busted up the last section of rope, staggered to the surface and a sense of intense satisfaction flowed through my brain. Eventually, the cave spat out the other three team-members and we packed up and hiked out to the valley for the well deserved pizza...

Caving in 'Rene' blends the distinction between exploration and sport, between the 'casual' and extreme. While others may be driven by the passion to explore caves, I was above all just curious to see it and experience what it's like being disconnected for several days under the Earth's surface. It's pretty amazing actually - you are at least half a day away from sunlight, but chances of rescue if things go wrong are slim, so it's good to keep that in mind. And honestly, it's been a while since I've last done some offwidths and so I was also longing for some type 2 experience :)

Ever since doing the first more difficult cave this spring and being told about 'Rene' I've wanted to see it myself and see what goes into organizing an expedition like this. I wouldn't have joined this expedition if it wasn't for Matic and Špela thinking it's fun to let a caving noob learn the hard way and that going sub-1k right away is just a steep learning curve. So definitely thanks to the whole DZRJL team for putting up with me. I am hoping for some more caving adventures in the future! Also thanks for the photos, I've stolen most of them from here, where you can also find the trip report (in Slovenian).Whooo!

p.s. Also thanks to Treking šport for providing me with the caving essentials from Petzl - from the super solid helmet/headlamp combo, the back-up headlamp, ascenders and descender brake.

Posted by Gašper Pintar at 5:52 PM No comments: