Lost in a sea of gray

So here is what we climbed last week.
The stop in Oltre Finale was a welcome detour that let us get some climbing done and wait out the rain in nice company. I see now a visit here was long overdue, it's a sport climber heaven and basically just a great destination for a week's holiday. Take Mišja Peč, select the best 50 climbs from 6th to 8th grade, add only a moderate amount of polish (most of the stuff was bolted post 2000) and you get an average crag in the valley. Plus it's scattered around, you can get shady or sunny sectors with various route lenghts, there's not much chipping... It's also very tourist friendly, there's lots of places to stay. We were sorted anyway with our friends booking one of the cosiest flats I've slept in. Ahh the luxuries of being in the know of right people :D thanks guys! 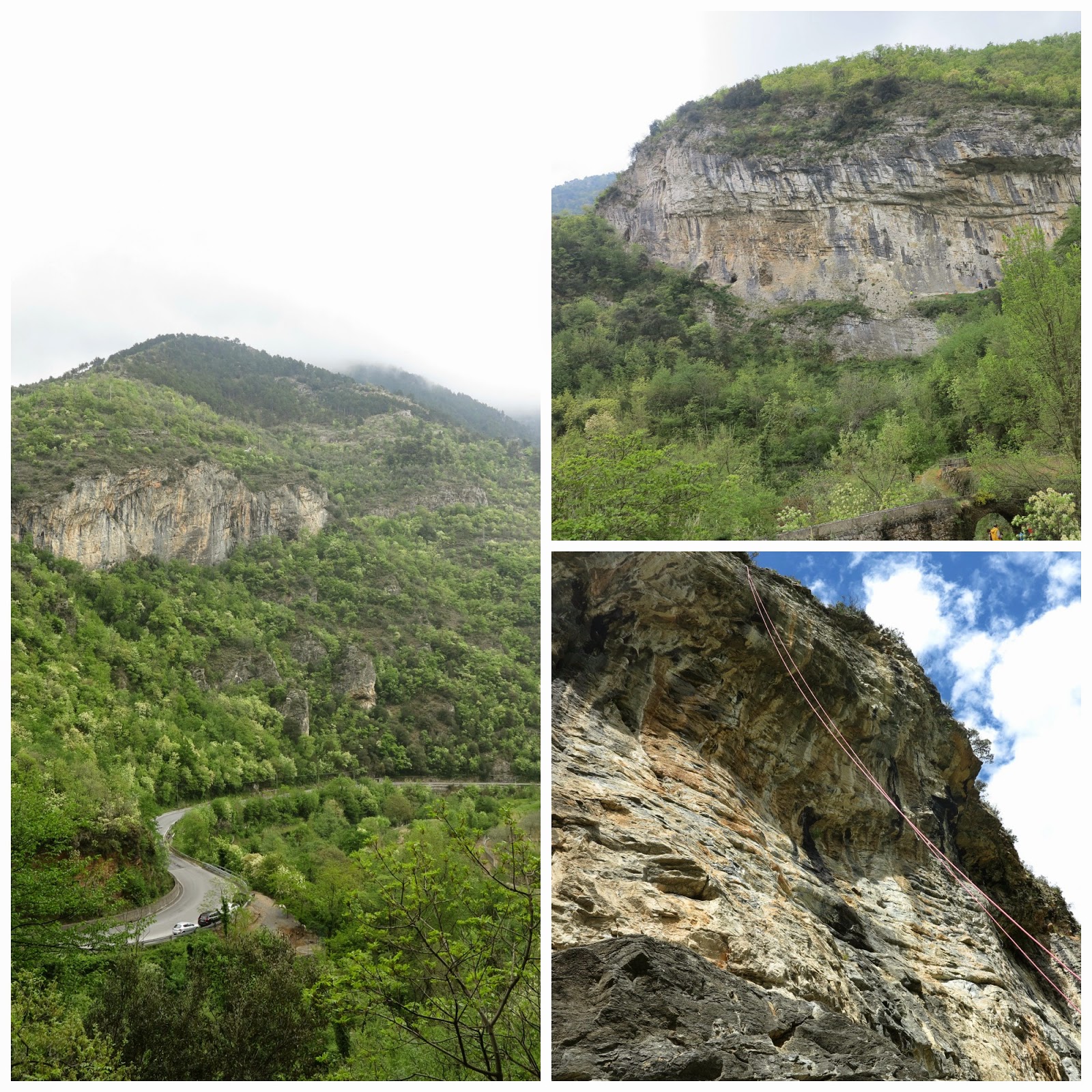 When going sport climbing to new crags lately I've been chasing that first 8b onsight. It's a matter of trying lots of different ones, getting lucky with the pick and also getting lucky in that particular moment. They don't come easy though. Where are those soft ones now??
I've had a good try in one 8b but eventually settled with an 8a+ and an 8a while getting massively pumped on every route I did. It's been a while since I've climbed lots of long routes onsight and one definitely needs to get into shape for it. Training only on the campus board obviously takes you the other way. It was tempting to stay for longer and try more of the endless list of routes here, but we made the decision and bounced to Verdon. 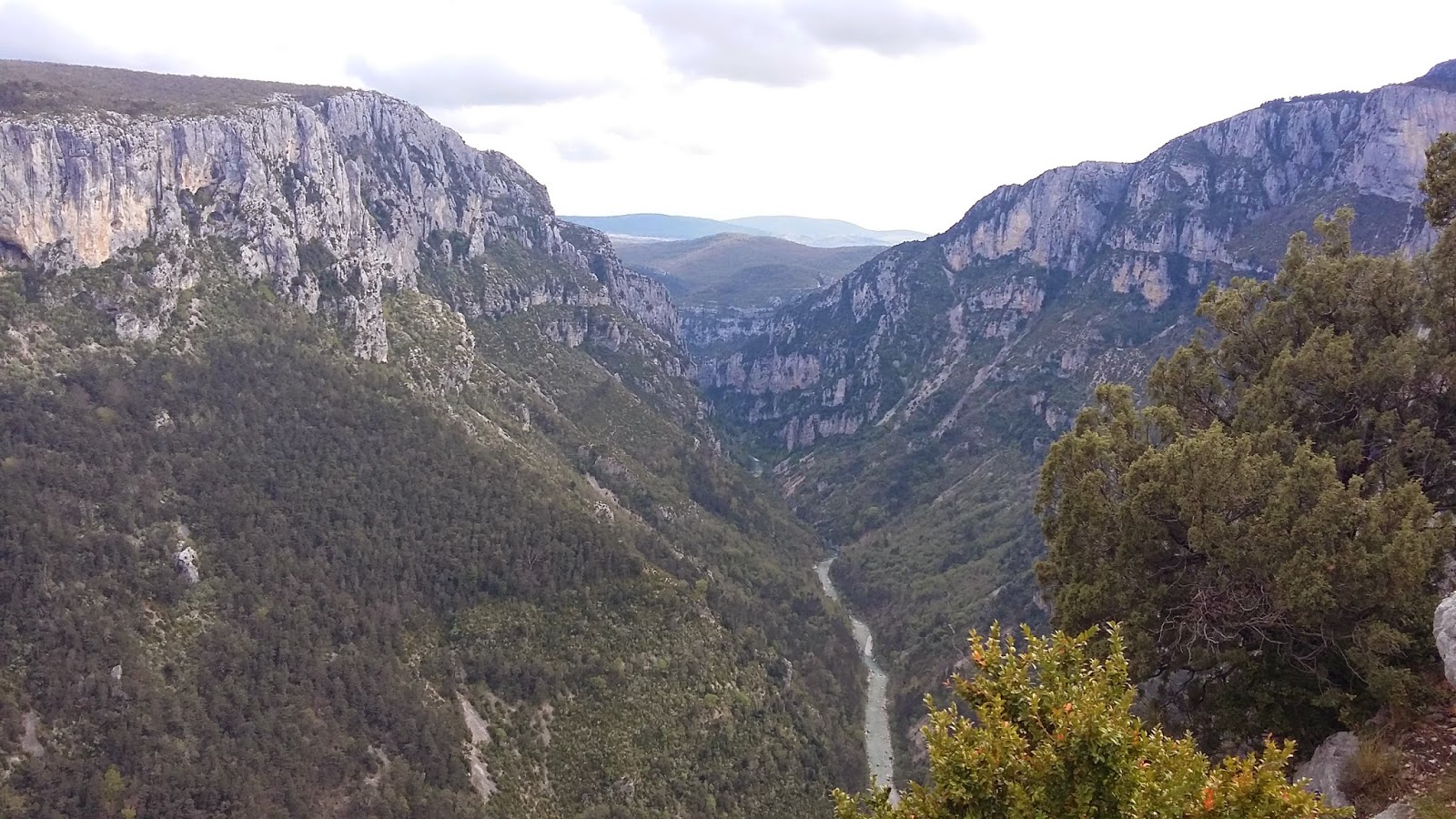 We were an un-even team of a sport climber with a great appetite for hard routes and a mountain climber with not so much cragging experience. Thus we compromised between shorter, up to 150 meter and easier multipitches that Eva lead and harder, old-school single pitches accessible via rappel that I was getting on, with Eva following with a jumar.
It was great nonetheless. I set up belays and carried water when Eva went and lead "Saut d'homme" for her first 6a multipitch climb with great, committed climbing between fairly spaced bolts. For me it was a valuable learning experience too, I learnt some rope manouvering from her (us free climbers are just so ignorantly unexperienced for such big walls) and got accustomed to the big air. I was forced to revise my big-wall skills and scouted the terrain for some future trips here. The list of routes I want to do kept growing as I flicked through the guidebook. I am coming next year to spend a few weeks to cover every inch of that wall!

One time I was going to try "Haute tension" 7c, a J-B Tribout testpiece. My abseil rope was too short to reach the anchor though. It was late and nobody else was on the cliffs any longer. A strong wind picked up just before and I knew now why everyone was gone. I hung there with a terrible runny nose, slightly anxiously sorting out my prussik ropes to reascend, I must have looked quite miserable. I've had a similar experience back in 2008 when we climbed in the Verdon for the first time with my brother and I dropped my belay device halfway up the wall. I did feel more confident now, but I can't say it didn't go with a bit of that cold sweat. Always a lesson learnt!

I tried "Pol pot", a long 7c+ famously onsighted by Jerry Moffat more than 30 years ago. It probably sounds stupid but I think due to that I was a bit nervous, I wanted it for myself too. Also due to the exposure I was a bit gripped and hands were sweating more than I'd like them. It's pumpy climbing, long lock-offs on gouttes d'eau (pockets that gush water when it seeps) and technical and tricky to read (I didn't try to work out the moves on rappel). Climbing inefficiently, I pumped out right at the top. Don't know if I'd claim the ascent anyway since you're always rappeling down the same routes? It's dangerous today with that many climbing purists/trolls out there in the internets. Still an amazing pitch, that part of the wall is so reminiscent of Ceuse... immaculate bulletproof limestone everywhere... and all that air! Man... I dream of going back. Hopefully a weekend escape to the mini-Verdon of Paklenica will sort me out for a while :) till then, youtube.

Last but not least. I got to lay my hands on a piece of climbing history. Destined to become the world's first 8c (felt like that) then downgraded to 8b+, no matter the grade today it is still prized as a major route. Doing it in one day was an ambitious call (I lacked beta, my knee sucked too), but I had a blast anyway. It's inspiring to imagine how far ahead of time mr. Tribout was back then. Such a crazy steep climb. And all those underclings... I'll be back one day to climb it. Here's a video of a french friend doing it.


Anyway... onto the next, thanks for reading, stay psyched people!

Posted by Gašper Pintar at 8:26 PM No comments:

The pilgrimage to Verdon

It all began a few weeks ago with a familiar popping sound, one that's never indicated any good. We were in Kotečnik and I was trying Botulin, rocking high up on a heelhook when suddenly it happened in my right knee. Burning pain and a sketchy feeling in the knee put me out of climbing for a while. I was feeling a bit lost. I was feeling in a great shape to climb on whatever and now any twisting of my right knee hurt bad. Maybe thirty years ago dropping knees was really considered a girl thing, but it's not so anymore (not that I'm a climber that would really excel at it - so I didn't lose all hope, I thought maybe just campus with one foot). A friend of mine had this happen some time ago and claimed climbing without dropknees was not possible. Anyway I was a bit gutted.
Two weeks later, the holiday was coming up and word on everyone's lips was where to go climbing. Weather looked bad all over Europe, our long-planned Verdon trip had failed and my leg still hurt anyway.
In a desperate wish to not stay at home, go somewhere new and still get some climbing done, I'd come upon this idealistic sounding idea.

Deep down inside my climbers soul I am a fan of the old-school: the golden age of French limestone, the birth of modern sport climbing. The time when overhanging roofs still looked futuristic and climbers wore lycra, all skinny and sleek like their guru Patrick Edlinger.  Old climbing mags make my imagination run wild and I've studied Jerry Moffat's 'Revelations' down to the very last detail. Let's hitchhike to Verdon!
Eva was the perfect partner in crime for this. 24 hours later we stood at the end of Tržaška beginning our pilgrimage. I wanted it to feel like back then, when there was no internet, information on climbing spots was scarce and only spread through the mags and word of mouth. Besides, I've always liked travelling via hitchhiking for I deeply believe in solidarity between people and how we need to work on keeping this spirit alive. So here's how we did it. 900 kilometres, plenty of un-planned detours and plan-B's but always with one goal in mind. I'd packed my climbing and camping equipment and I felt care-free, as long as I end up seeing that magnificent sight of the gorge opening up in front of you as you walk up 'La belvedere de La Carelle'.

The hitch there was happening steadily but at no significant speed. We had to change many rides as most people could only take us maybe a 100 kilometres. The language barrier is a real problem for me in Italy, even though I've now improved a 1000% since the last time hitching through Italy, I mostly rely on mimics and giving some French or English words an Italian-sounding accent and hoping it will work. Speaking the language is the key, this way the ride can be an experience instead of just travel. Usually though, you will get rides with people more interesting in particular and they will speak another language. We got one with a French guy living in Italy working as a dentist for horses (!) and had an intense debate on politics, economy and life in general. While this is generally a topic reserved for evening beers when everyone feels a little smarter than usual, it's just exciting to hear different opinions from different people. And he even changed his course so he could take us further down our path! Legend.

It was getting late though and we weren't advancing as we hoped for. In essence hitching is a game of lucky coincidences, while the hiker tries to increase the chance of it happening. Well, we could have expected this or something similar given the amount of Slovenian people heading to climb in Oltre Finale (Albenga). Somewhere around Alessandria in a petrol station, a car pulled over with the best crew of friends. A few hitches later and we ourselves made it to Albenga and thus ended up in an unexpectedly cosy night for a hitchhiker.

This then turned into a few days since the climbing here was that good. However, Tuesday afternoon we paced ourselves up again. After getting benighted and forced to camp somewhere in the French hillsides, only kilometres away from Verdon, we reached our destination on Wednesday morning and finally got to feel all that glorious air beneath!


What we climbed, how I got scared while dangling above the void with vultures looking upon and how the infamous 'Verdon manouever' and prussik-climbing came in handy is another story. I also got to satisfy my 'climbing history-geek' side with trying one of the J-B Tribout classic from year 87' and I am so psyched on this. More on that some other time.

Finally, the trip back was memorable in its own right, too. We escaped the rain in Verdon and were travelling fast, until it all came to a stop in Antibes. One more benightment and our morale was low. Next morning we were saved by a Serbian truck driver who was going all the way to Sežana. It was a pleasant, whole day ride and we experienced that true Serbian hospitaility even despite being crammed with all our stuff into a cabin of a truck. Chit-chatting on everything from world war 2 history to Novak Đokovič and vegan diets the day melted into a swirl of passing cars and smelly, tourist filled Autogrills as we travelled along with 25 tons of other lemons. We made it back home! I ticked one of my climber's life goals: the pilgrimage to Verdon :)