A visit from Quebec

Hey,
the past two weeks have been a great time! We hosted a visitor at our flat. Julien is a friend of mine that I met three years ago while climbing in Ceuse. We had a memorable day trying the beautiful classic 'Face de rat' and enjoying the Ceuse lifestyle.
I was super psyched to have him over in Slovenia! It's not only Osp and Mišja Peč for hard climbing here, as long as you're psyched you can get a total bang out of the local crags.
The guy is strong and I wanted to show him the best of our summer crags. We visited Bohinjska Bela, Kanjon and Sopota, Kotečnik, Čreta, Warmbad... and got some good sending done :)

It was a great time staying in Ljubljana, sometimes mellow, sometimes super exciting. I still had to pass some exams and it was cool to have a motivated partner for an afternoon session. We had some cool weekend warrior sessions after my exams (which went well, too!), a few nights out in Metelkova to celebrate and a few proper, full-on days of climbing which leave you totally wrecked in the evening and that I was lacking so much. Last Sunday was the culmination of the good energy and we had a smashing day in Kotečnik.

It was a nice transition from the stressing year at uni to a long summer vacation :) Now Julien is setting off for the next leg of his trip and I'm packing up for a two weeks' stay in Fontainebleau with kids from PCL.


On Sunday we felt it was high time we finish our projects in Kotečnik. I was getting at Iluzija, the 8c testpiece which is hands down one of the coolest hard routes I've ever been on. I have already had some very close attempts and it seemed to be turning into a mini epic. Sometimes bad conditions, sometimes wrong beta - it was quite at my limit so things had to align to make it happen.
Julien chose to work on Umazana igra, the amazing 8b+. He had it worked out well and Sunday seemed like the day to send.

It was cool to feel the real psyche again... Some days before at the crag I was kinda mellow, just doing some climbing and not really focusing on the sending. On Sunday it felt different. There was no distraction.
Julien literally cruised Umazana igra on his first go of the day. On top of that, he scored a rare onsight of Specialist za življenje, 8a+ and we both did Firmament, 8b at the end of the day.
Before that, I finished my struggle with Iluzija. I messed up the first two attempts despite feeling good, I felt I can do it even in the third attempt but it was going to be a close call for sure. It's these situations that make it really exciting... knowing you can still do it but it will take an extra amount of concentration and determination. There was a great atmosphere and friends cheering and I felt so psyched at the crux! It's just one of those best moments to experience. 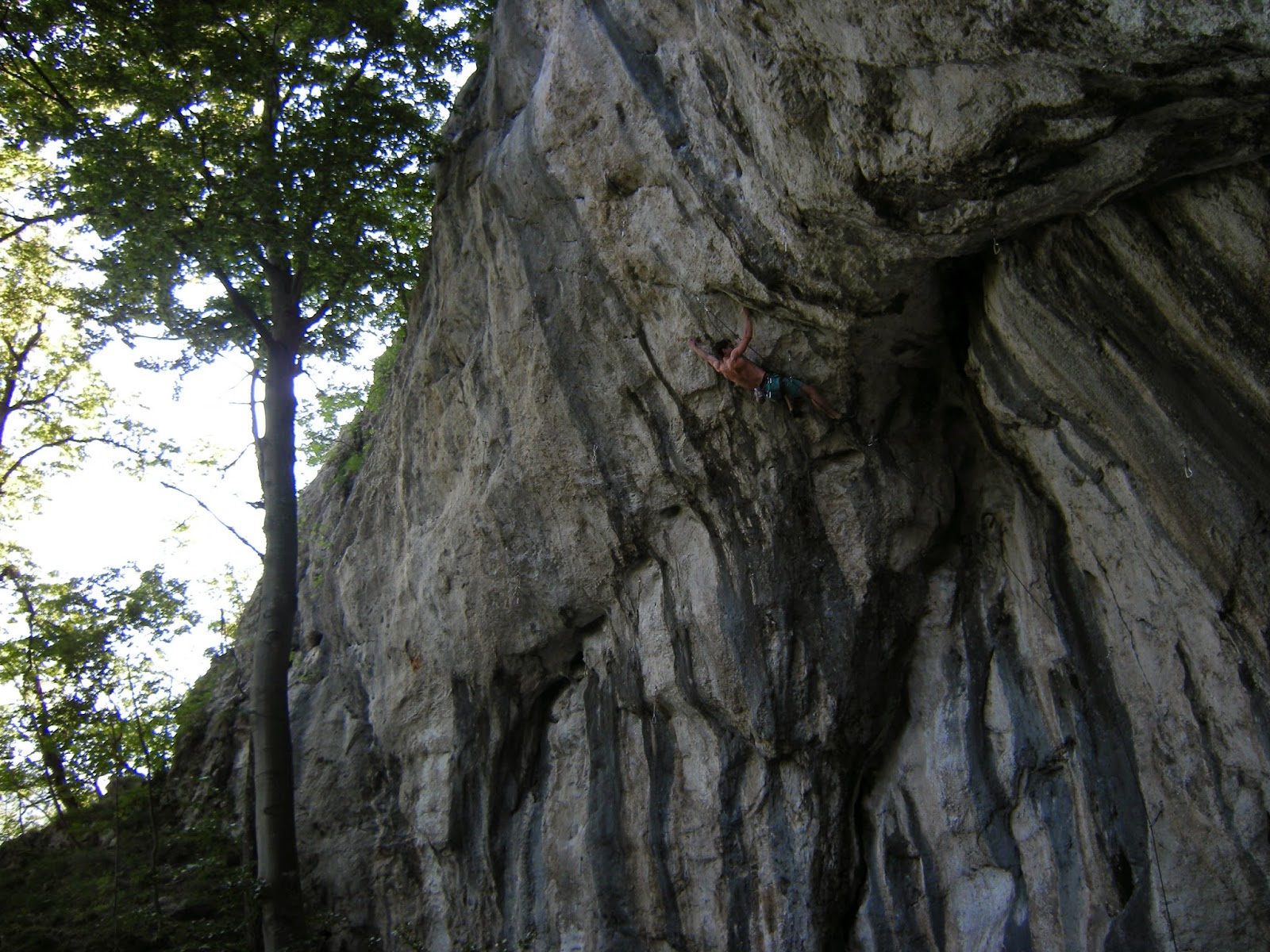 It was great to have a psyched visitor. The motivation kinda passes on to others... Also, out of the people I've climbed with, Julien is the guy with the highest ratio in hard climbing/laidback approach ^^ climbing with and meeting people helps you see certain things from a different perspective and I got lots of inspiration and ideas both in the climbing and general aspect.
So, a la prochaine, we're ready to kick off for another adventure, let's see what happens :)

Posted by Gašper Pintar at 12:38 PM No comments:

Yo all, I've been up to a couple of things... It's been two hardcore climbing weekends!
First the national cup on Saturday, climbing with Domen and Maja on Sunday and routesetting at Plezalni Center on Monday, an then a weekend in lovely Kotečnik.

The national cup in lead took place in Šmarno pri Litiji and it was the first event of the year. Lead world cups are coming up soon while the bouldering world cup is well underway... thus the Slovenia climbing team looks stronger than ever. I was psyched to meet all the people again and see how I would compare to some of the best. I too have been training pretty hard, in fact, so I was wondering how I would do.
The comp was great fun, the routesetting was good (especially in the finals) and I gave the final route a good go, climbing a muerte until I got pumped out of my brain. I made it into 7th place which is okay! Hats off to the other underdog Izi who made it onto the podium in second place, only superseeded by the unbeatable Domen Škofic!

I'm glad the Ljubljana life hasn't taken its toll on my shape for lead climbing! The walls of Plezalni Center have offered great training, too. I'm psyched for the rest of the season! 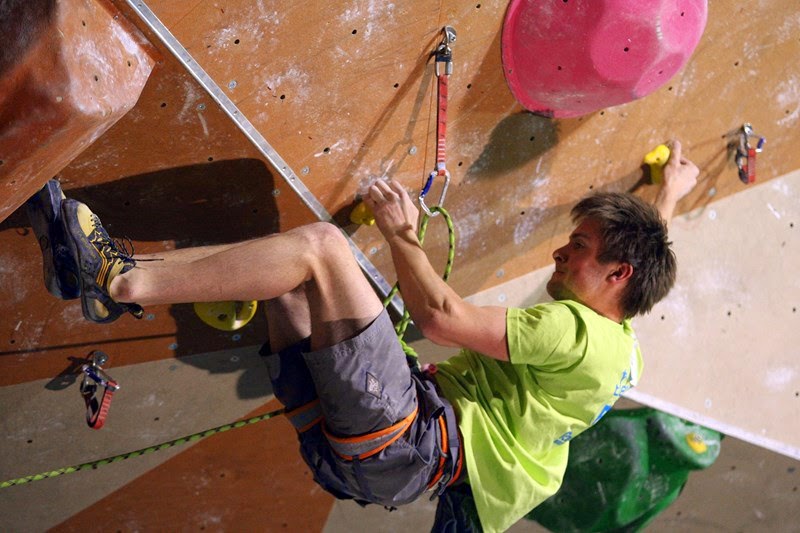 Next was a visit to a great local crag in Carinthia just over the border. I teamed up with Domen Škofic and Maja Vidmar, both super strong competitors on team Slovenia - enough said :)

I knew this wasn't going to be easy... Domen is one of my favourite climbing terrorists - he's the always psyched dude who's never too tired for another attempt at a hard route. We always competed together in the youth categories and now it's inspiring to see how far he'd already pushed it... This guy is sending 9a, onsighting 8b+ and has a great lead season upcoming (at least according to the ease he climbed with in the comp).
I really wish for both Maja and Domen to have a great World Cup season... it'll be so exciting to watch!

It was also great to run into Barbara Raudner again after a while. She's of that kind too - always going a muerte and cheering for the others. Not to mention she is sending damn hard, too!
Together we had a really good vibe at the crag and I finished totally wrecked but content! 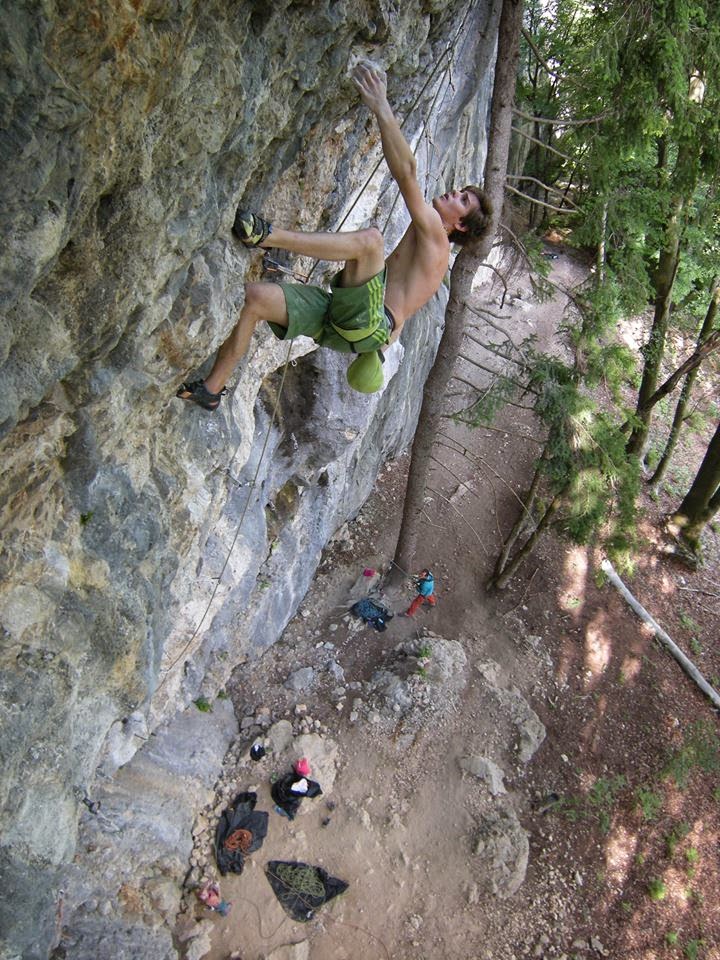 Inspired by the weekend spent outdoors I made the most of it and set a new route at PCL. Dedicated to all you nutters out there :)

There is a big makeover of the routes in the big climbing wall comping up, so make sure to drop in for a session @PCL in the next weeks! We'll do our best to keep you busy with some funky shiat!


This weekend I spent in Kotečnik. It was a relaxing time, just right before the exam frenzy totally takes over (I've been neglecting studying way too much, still).
On Saturday I climbed with my roomie Klara and had some good runs in Iluzija, the crazy 8c route. Unluckily, the conditions/physical preparation/overall state of body and mind didn't permit me to get it done. Surely it will happen the next time on it, I was super close :)
On Sunday I led a great team of young climbers from PCL for a nice day of climbing. It was good fun despite some rain, and the youth got some nice ascents in the bag! There will be a full report on http://plezalnicenter.si/.