My new found psyche for big walls drove me to Paklenica again. I was well psyched for the upcoming extended week-end. I knew many people were going there because right now is a traditional period which offers prime conditions for routes in Anića Kuk. I jumped on the ride with Jerry who is a bit of my menthor when it comes to many things in climbing. Anyway, I knew this was going to be fun.

A visit to Kompanj on Thursday kind of set me up for the weekend. A close try in an 8b onsight (which I managed on redpoint later) and testing out a fresh pair of Miuras (this time a bigger size) made me look forward to Paklenica. Yaay, I'm still fit PLUS my feet won't fall off at the end of the weekend. Let's go then!

The scene was quite alive! There was a lot of people, but mostly mountain climbers who make a visit to  Paklenica for a change to the alpine climbing. It's a group of people equally as big as the sport climbers in Slovenia, but obviously a bunch of people I don't know so it was pretty cool to get to meet some. Mountain guides, 8k meter peak summitters, adventurers of a different kind than my sport climbing friends. They still have the same attitude towards partying, or maybe even a more hardcore one :)

The first day with Samo we climbed Kaurismakis mistake with, a "modern classic" route with nice sustained difficulties in the 6th grade with a crux 7a+ pitch. It was a nice warm-up for the weekend to come.

The second day I teamed up with Anže Klarič, my buddy from PCL. We climbed Zenit which must be one of the best routes of the whole wall. The three top pitches are incredible climbing on perfect rock with a finishing arete-and-mantle to top out that I kept describing to everyone willing to listen. Anže didn't free it but could easily do in the next visit, go for it dude!


The third day I teamed up with my Croatian (actually a Slovenian undercover) friend and photographer Luka Tambača to try one of the routes on his ticklist. We aimed for Rumeni strah, a respected route with a crux 7c slab pitch. 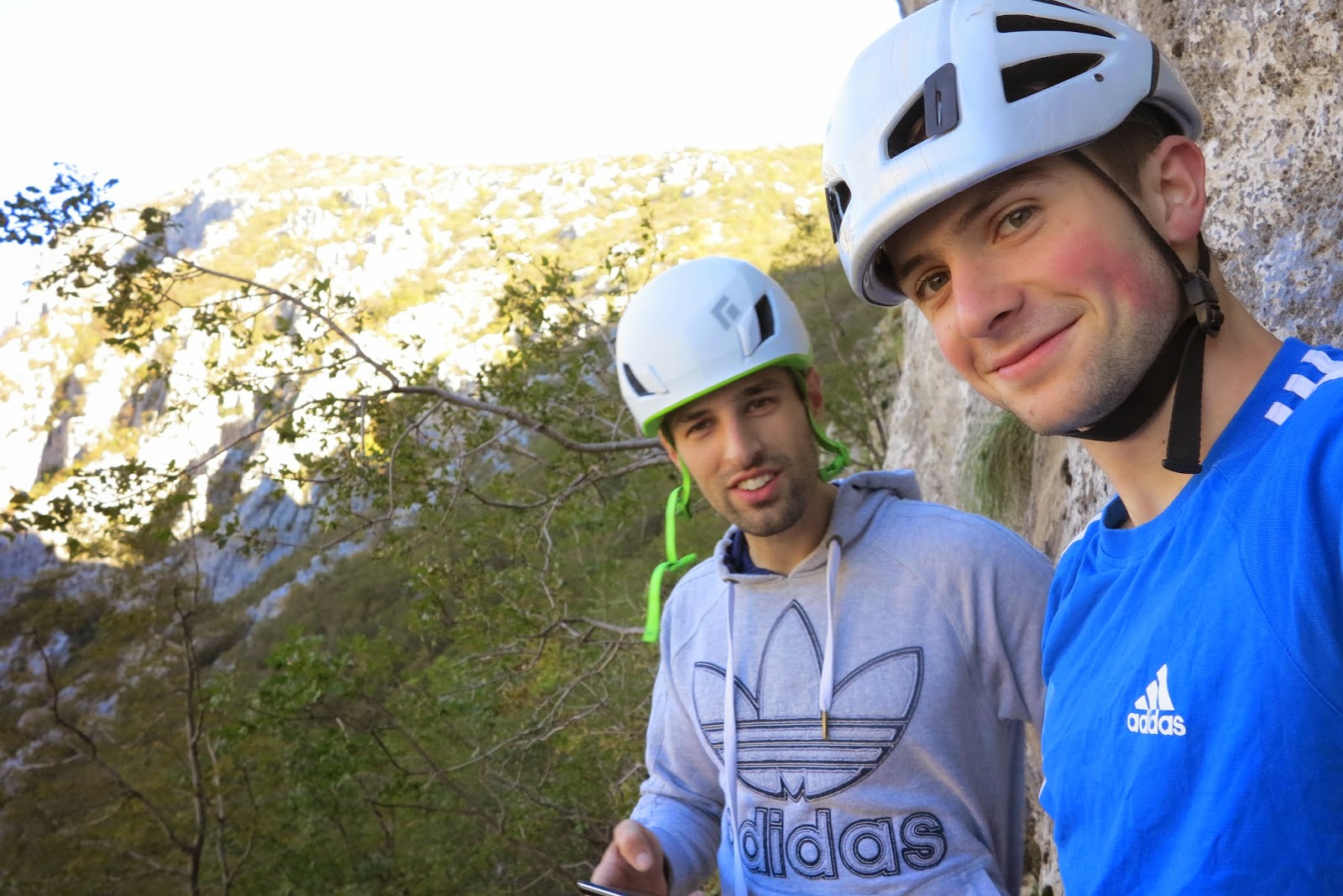 It stood its reputation, some of the pitches were nails given their grade, but somehow I managed to get that 7c pitch in the bag onsight. It wasn't over yet, next I climbed a 6a crack with a 20m runout (note to self: it's wise to bring gear sometimes) and got a bit scared, thus getting the full package! Ain't no better thing than topping out after a route like that!


Climbing with different partners every day was cool. Each route was different in this sense, too. Big ups to everyone who was there, this was a weekend well spent! Also cheers to my Croatian friends, thanks for the hospitality :) I love to come back...
I'm dreaming up my next objectives, caught between short term plans and other things in life that need to be done, unable to come up with a big long term plan. Brid klina and Spider are on the all-time ticklist now, I'm only looking for somebody to join me! Verdon, the limestone slab multipitch Mecca is waiting, too... Waaaah too much to do! Thanks for reading, until next time, Pinti


Posted by Gašper Pintar at 1:19 PM No comments: