Well what's up everybody, the summer here is in full swing and I am totally enjoying the freedom it brings... Last week was not all that special, a few things happened last weekend: we did the first national comp but I sucked in the qualification so I didn't even make it to finals. I'm not sure why, but I can at least say I got really pumped, I put up a fight. Respect to Domen Škofic for the victory, it was a fun comp but a bit weird in some ways... Sergej didn't qualify either but when we tried the final route before the final, his climbing would put him in first place in the comp :D

So I wasn't very psyched about the comp and I wanted to go climbing rocks the next day - Janez, Jakob, Dominik and me hit Bohinjska Bela for an afternoon session! I was keen to do Ritem v zraku, the 8a+ I tried last time. I did quick work of it, then I played around a bit on Moški za naslado, the 8b that has kept my attention for a while now. Jakob was strong as well and he did Love story, 8a+/b on which Janez also came very close!
Good day out, cheers to my mates for coming along!

The week then consisted of a lot of learning, memorizing of facts for my oral exams at school, this is always slightly boring when you would rather be out climbing, but the hard work always pays off and I'm feeling very positive about these exams... On Friday I was DONE, done with high school, forever I guess :D

Saturday it was time for a team training in Kranj. I sucked, I'm not sure but lately I find it hard to perform well on plastic?! It seems I'm just getting pumped all the time. But our team got new clothes by Positive vibe so we are keeping it fresh&in style, keeping in mind the climbers proverb: if I'm not strong then at least I should look good!

And finally yesterday, it was time for more rock! I returned to Bohinjska Bela hoping to finish off Moški za naslado!
This route has now resisted my attempts for some time. It's "only" 8b, usually I can do this grade no matter what the route is like - but this one is apparently my anti-style. Actually, there is one move which prevents me from sending, I've come off at that point several times. A tricky slab takes you to a big undercling where you can shake out and compose yourself for the finishing blast through the bulge above which involves some hard lock-offs on good crimps and a killer undercling move!

I didn't succeed this time, either, so I am putting it off until I will feel like it again, or know that I've become much stronger ^^
Since I was still keen on sending something, I opted for the easier Ženska za nagrado, a supposedly soft 8a. I blew the first try on the last hard move, then sent second go. It's a great route, a real classic of the crag.

Cheers to the mates that came along - Milan, Martin and Dominik, venga boys! We had a good day out, killed a ton of mosquitoes and got well pumped.

And also Ženska za nagrado was my number 100 eight grade route! Yaay! What a jubilee haha :D it's been five years since my first! Half of them are 8a, I would have preferred that there would be more harder ones but anyway, it's a nice number innit ^^?

Peace out people!
Posted by Gašper Pintar at 10:27 AM No comments:

Email ThisBlogThis!Share to TwitterShare to FacebookShare to Pinterest
Labels: other, sending days

Almost done with exams! It is due to these that it's been a month since I last posted here, but actually nothing worth mentioning happened either - at least in terms of climbing. I finished high school and I'm now taking the matura exam which represents an end to the pre-uni education, may have an impact on which school you can go to afterwards and supposedly marks your entry into adulthood (well, not sure if I can relate to that).

I invested quite some effort in getting all the knowledge into my brain curves, but I think it will pay off - I'm pleased with how it has gone so far. I don't want to play a smartass here, but it would be cool to see I did well. I'll let you know how it was.

Another important step for me was obtaining the driving license. After failing the first one, I was quite nervous before I took the test second time. I don't think I've ever been that nervous in a climbing competition! Anyway, I somehow managed to pass it alright without killing anyone and now I'm legally allowed to drive. Yay!
Having done it, I was relieved greatly - it's not that I'd be desperate to be allowed to drive, the lessons and all were getting boring and time-consuming (and it's expensive as well). But it's pretty awesome anyway ^^ 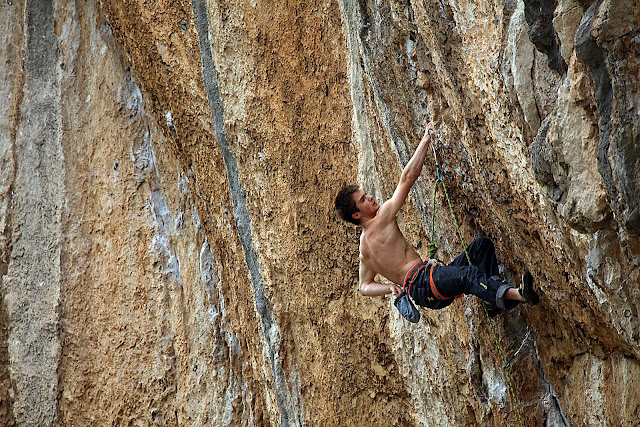 So obviously, we had to put theory to practice. Last Saturday, we (me, Urban, Roman and Maja Vidmar) did a quick commando mission into the heart of Primorska land. In the morning I went to school to take an exam, rushed home, loaded the guys in the car and we were off!
Initially we wanted to go to Skedenj, a cool cave-like crag with steep, long routes, but it was all wet due to rain of the previous week. Not a single patch of the rock was dry, and there was a wet mist floating at the bottom of the cave - not good!
So we resorted to the classic, the crag of choice - Mišja Peč. It was cloudy and thus not too warm (but still quite hot!). Actually, the heat made any serious attempts in seriously hard routes futile. Me and Urban had a go at Sreča vrtnice (8b) and a work session on Talk is cheap! (8c). I feel I need to say this: BIG big respect to anyone who has done this route. I think if I EVER do this, I quit climbing and become a monk. Or maybe take up football.

Then I felt like maybe today was the day to finally send Pikova dama, the 8b I have attempted a couple of times. So once again I climbed up to the top, move by move without a struggle, with a lot of rest and chalking up. I came to the last move that has stopped me a few times already (it's literally the last move - from the jug you get you can clip the anchor) feeling more fresh than ever, but I blew it.
Next time! It's such a cool route that you can't even get pissed off about it.

Luckily, it was only me who blew it - Maja dispatched it second go, like a boss! It's funny how she found my cruxes easy and how she struggled where I thought it's piss. Anyway, the top crux is just straightforward micro-crimp ladder and as such no big deal for the master of the crimpy style! Big ups!

To consolidate for the bad luck, me and Urban decided we would do Albanjski konjak, a classic 8a which stretches through the center part of the crag, a great endurance route with a clever kneebar to help you get the cookie. He did it quite easily, and then thanks to his beta I succeeded as well (didn't really expect it though). It was a bit of a fight, and thus I was even happier :)

In the end it was a good day out, great to escape the bad weather and school obligations back at home. There should definitely be more of such times. Peace.

P.S. Congrats to the youth team for their performance in Voiron EYC! Namely Domen, Sergej, Anže etc.! Good effort guys! I'm psyched for the next stage of EYC in Austria in July!

Thanks for checking in!

Posted by Gašper Pintar at 12:57 AM No comments: