Back to the climbing life

Hey all,
finally things eased off a bit and there's more time for climbing, socializing, doing things and updating this blog :) I finished my exams last week and have since been enjoying a little time off with no set plans or dates... and it feels amazing! But at the same time I must say that despite it may not look like it, this year at uni has been  great, a process that I'd enjoyed going through (at least the most of it :P) - it's a learning experience about myself, an opportunity to learn a great deal of invaluable (scientific) knowledge and getting to know a lot of like-minded people full of motivation and energy for fulfilling set plans...
The shift to the climbing life contrasts the uni life the most right in this aspect - I have found that the days of climbing and climbing trips that I'd enjoyed the most were those that happened the most randomly or spontaneus. I think it's the extra sense of adventure you get when you don't know what to expect that spicens things up. So right now it's a little hard getting back into this mood as I've kinda learned to try and make the most of my free time... as much as studying hard and havng the patience and determination to commit is regarded as an amazing ability by some, I think that knowing how to live life unstressed and keeping it fresh and spontaneus is just as amazing.

Anyway, I thougt I'd let you know what's up in the climbing world. We've mostly been climbing at Čreta lately which has stayed fresh despite the weather and our numerous visits... I forget all the ascents we've seen, but I remember a few of mine :) I managed the full pitch of Ledena doba which was first done by Rajko a few weeks ago, he gave it 8b+ and I believe this is accurate although it could be 8b/b+ mabye :P I finally did Joža Bon Joža, a very nice 7c+, and also a hard, short 8a called Spoštuj lokalce :)

I've last visited Čreta on wednesday with Miha and Lucija, who I've been coaching this year, and it was nice to see them enjoying the rock climbing. I got involved in the new project in Domačica called 100% BIO, it feels pretty hard and I'm not sure if I'll be the one to send it, but I'm definitely psyched to come back and try again.

Today I returned from a short two day trip to Štajerska where we climbed with Kruder, Izi, Hribar, Jarm, Zorko, Andro... I got to try the SICK 8c at Sopota called The secret and I'm very psyched to return and try it for some more... In the evening we had barbecue at Kruder's because him and Hribar are leaving for South Africa, Rocklands on Tuesday! Thanks to Kruder and a VENGA to both, I hope you crush!
Today I climbed in Kotečnik feeling a little heavy from the barbecue so I could only repeat Specialist za življenje, 8a+, a classic that I've left undone for too long. I ran out of time, power and psyche for harder stuff, but had a nice time anyway.

Another nice episode was two weeks ago when I took my collegues from the uni climbing! We stayed in Bohinj for the weekend for a much needed break from studying and staying inside all day long. I took them on a few 4's and 5's for a taste of climbing and some adrenaline :) in the evening we chilled, had barbecue and enjoyed the good time. I was happy to see them enjoy the climbing, too. Shoutout to all of you guys, Rok, Urban, Luka, Eva, Ana... and the weather too. Thanks to Ana for the pics!


So finally a shoutout to everyone who's been out lately, we're living this privileged life where you can get a total bang out of climbing a small piece of rock. Kinda funny, or pathetic, depends on how you look at it :)

Now I'm first off to Val di Mello on tuesday for a week of camping and climbing with the kids from the home gym... should be fun :) and then onwards to Spain sometime in July. Bring it on!
Posted by Gašper Pintar at 11:13 PM No comments:

Word up everybody,
I finally got myself to writing a post over here! It's been quite some time that I've been really busy with uni (and also thinking a lot about it, so kinda less psyched for other stuff), but now that I'm halfway through my exams for this semester I can feel the psyche growing unstoppably, and I'd like to channel some of it to here. Above all it's the wish to get out & move the body, end up somewhere unpredicted and get un-stressed :) and do some hard climbing inbetween :P

I'm really looking forward to the coming months. A lot of hard climbing will go down, I hope to go on a few trips and also I feel quite in shape, if not else definitely stronger (but not fitter) as I'd ever been (thanks to the campus board :P).
I had a quick visit to Baratro last week (or was it before last week?) which was nice as I'd almost sent El musico, a hard 8b on my second go from the bottom (which amazed me since I couldn't do the start moves last year o.O). It was a cool day out with an unlikely made up group of me, Gregor Selak, Matej Sova, Jurij Ravnik (the author of the new Mišja Peč & Osp topo - much recommended :)!) and Jošt Žohar. Some tips and betas from the climbing legend and Baratro local Matej proved to be really nice, thanks a lot mate :)


Another nice chapter has come to and end, the teams I've been coaching throughout the year at our gym have finished the training until autumn, and we did a small bouldering competition with one of them. I must say I've had a blast coaching all of them, I think we all enjoyed it :) 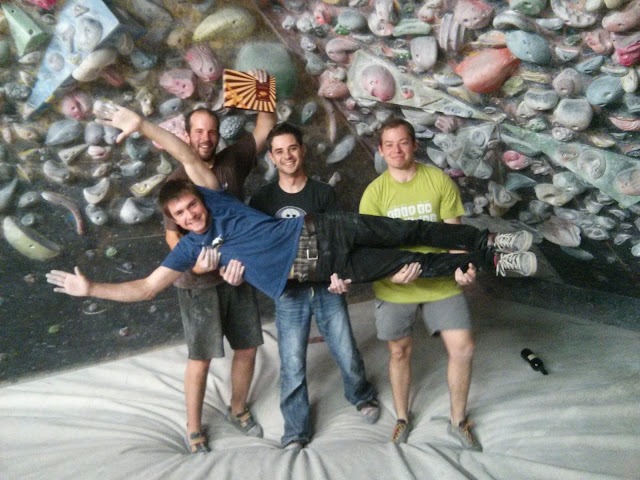 and there's some inspiring videos I MUST share with you in case you haven't seen them yet;
and amazing clip by my friends who were in Switzerland bouldering. The creativity is endless :)
and the sick sick training video from Jan Hojer, he's amazingly strong and also a true climbing hero, psyched for this guy (he won a BWC in Innsbruck!)

On the other, non-climbing related hand (but equally important after all), after leaving my room after having revised for the last month, I've been opening my eyes to what's going on around me, taking some time talking to people (especially my granddad and grandma who always provide an endless list of interesting stories and eye-opening experiences), sucking up some information beyond the uni and climbing related stuff. There is so much going on right now in the world, big changes are about to happen and I hope for once a revolution will lead towards a better world for all, stopping the growing discrepancies between the rich and the poor, the growing amount of poverty, frustration and anger among the people (Slovenia included). I hope one day soon, I will find my way to parcticipate in the movement and join likewise minded individuals...


Have a good one everybody, hope to see you soon out there! Can't wait actually! BOOM!

p.s. some good homegrown music that I find inspiring:

Posted by Gašper Pintar at 3:09 PM No comments: