"Dude, I tell you, Balkan is the future" exclaims my friend Izi looking at me ecstatically. We are in Prilep and he had just tried the route he bolted the previous day and we are all feeling the excitement in the air. Rock everywhere, virgin rock, waiting to be climbed, no crowds, no polish, the rock is our playground. Find your line, clean it, figure out the moves, break holds, work hard on it, make vision come true.

The Roctrip was a great opportunity. Travelling by my own, I would have never went to see that many different places by myself. The caravan created a unique, true roadtripping atmosphere and it was nice to discover these places with other people. Some sort of campground was provided in every stage and I was keen to jump back into the tent lifestyle. Reducing your daily routine to brushing teeth in the morning and evening and that's it... I love that. Our ride was a mess, however, but I didn't care. We would sort it out when we get back home (many thanks to my father for making this whole journey possible by lending us the car!).
As far as I know this is the aim of the Roctrip. Bring climbing into a yet undeveloped spot with great potential and plant the seed for the symbiosis - the local tourism and happy climbers from all over the world. Petzl is managing a visionary effort. It's a new age "climbing colonialism" in a totally good way. At every stage we met local climbers who told us more about each spot, its development and showed us around. All were really psyched about the Roctrip visiting - it really is an opportunity to showcase cool crags and put them on everybody's map.

Back to Izi. "I want all of this stuff bolted man. I'll keep coming back here until the job is done." The guy's motivation is endless, and sometimes overwhelming. He makes the usual climbers' rant about worn out fingertips look like a baby crying. Well, he's one of those I call climbing terrorists. But his psyche is infectious, and that is something I like most about a climbing partner.

The line he bolted goes through a huge overhang on a wall higher up from Balvanija, facing Dabnica below. It's a 25 metre sport route with great, diverse, powerful moves on huge slopy blocks and undercuts, something very exciting for us, having grown up on the limestone of Osp. After a while trying it I started to realize this is the kind of stuff we read about in magazines and so. It just reminded me so much of this route "Ganesh" in Badami, India that I kept looking at in the poster above my bed as a kid. So... is this like "we're living the dream"?  Maybe... Above all we are having a blast. A few days before that I caught a cold that drained my energy for climbing and exploring. Trying this route was a surge of psyche that finally cured me up. "Punchline" is now awaiting its' first ascent.

In the evening, all was quiet. The caravan had left Prilep for Meteora. We would begin our return to Slovenia the next day. We quietly ate dinner and went to bed. I loved feeling my muscles sore again and fell asleep content. We were climbing amazing stuff and all was good in the world.

We didn't head straight home, though. We went to see Mavrovo, a place in the west part of Macedonia where apparently "a futuristic cave" is being developed. We had lots of fun climbing there with Miha, Klemzy and Tanja.
The crag truly is quite futuristic! I accidentaly got on a project bolted by Klemen Bečan and experienced what climbing in the future will look like... respect to Klemen for bolting this. By the way, have you seen his new EpicTV video? He's known for a while the Balkan really is the future :) 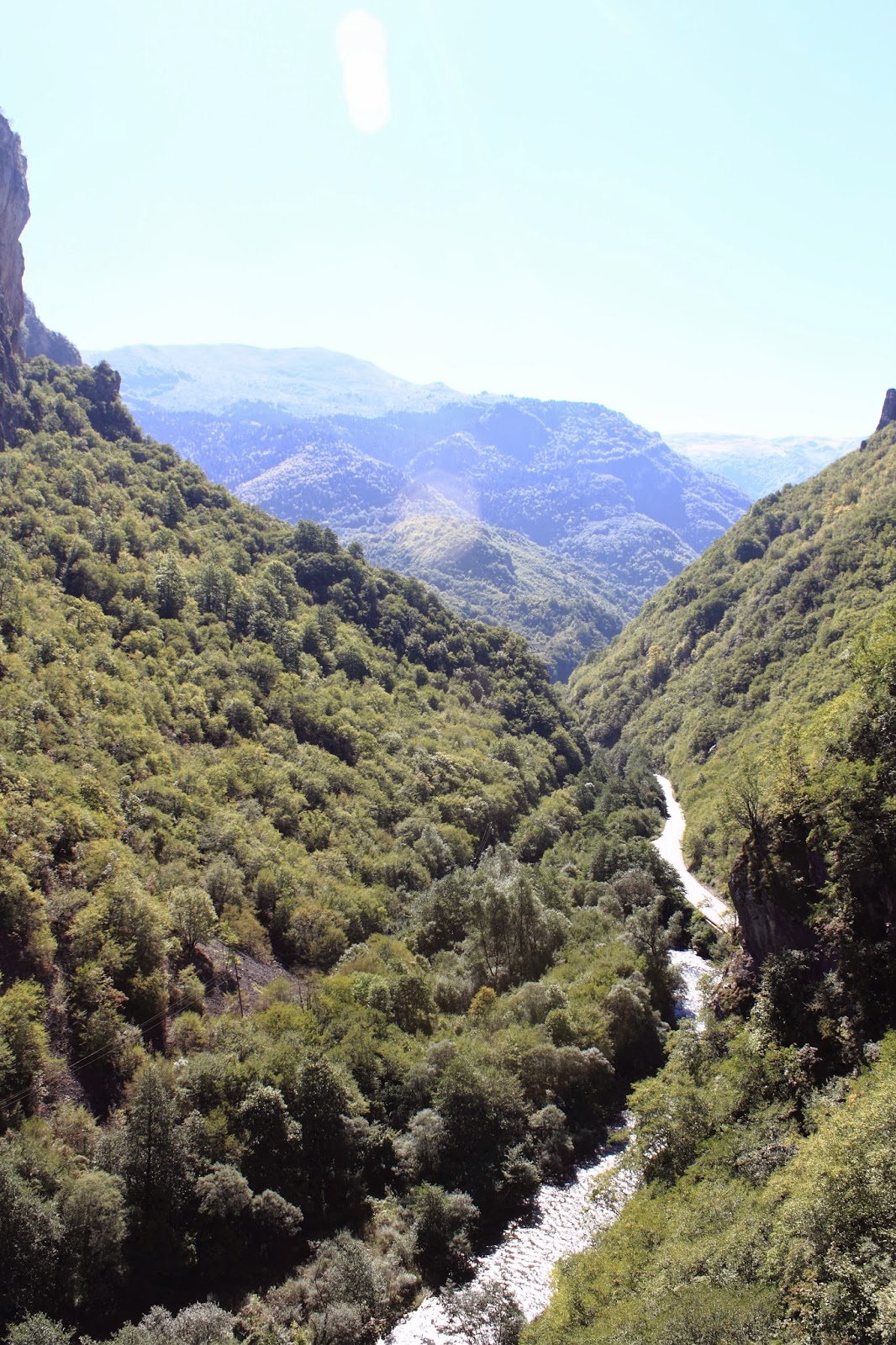 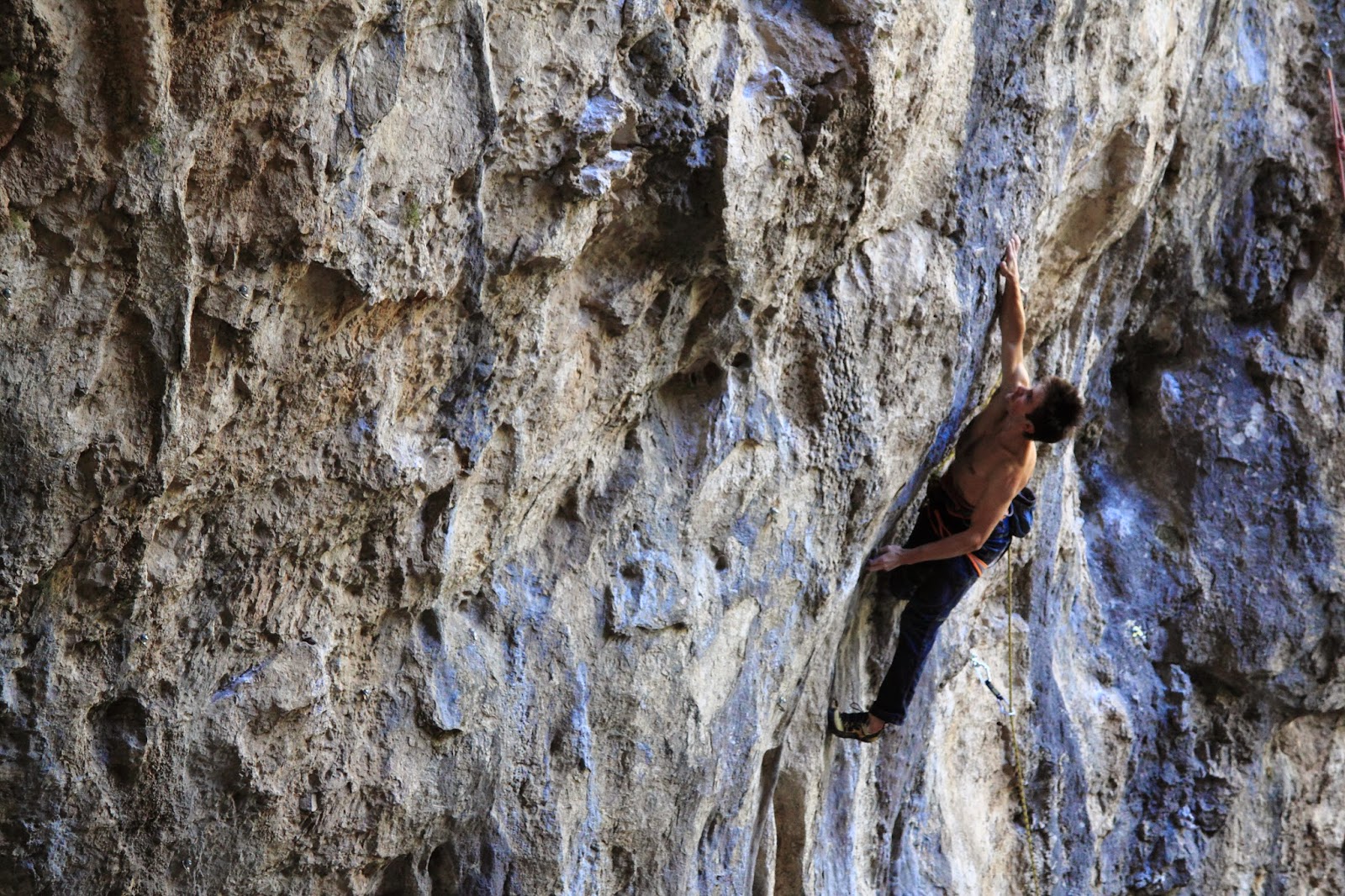 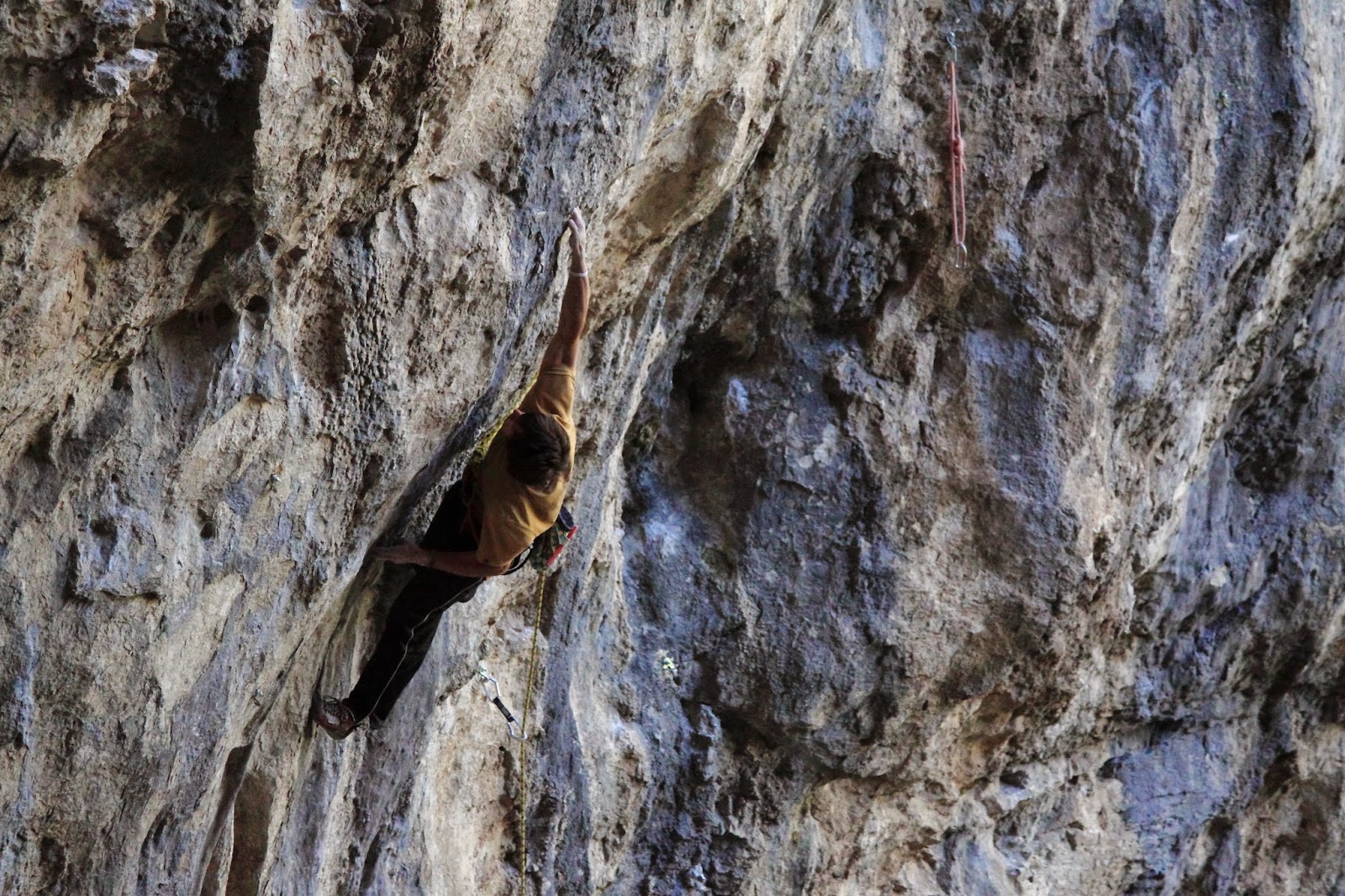 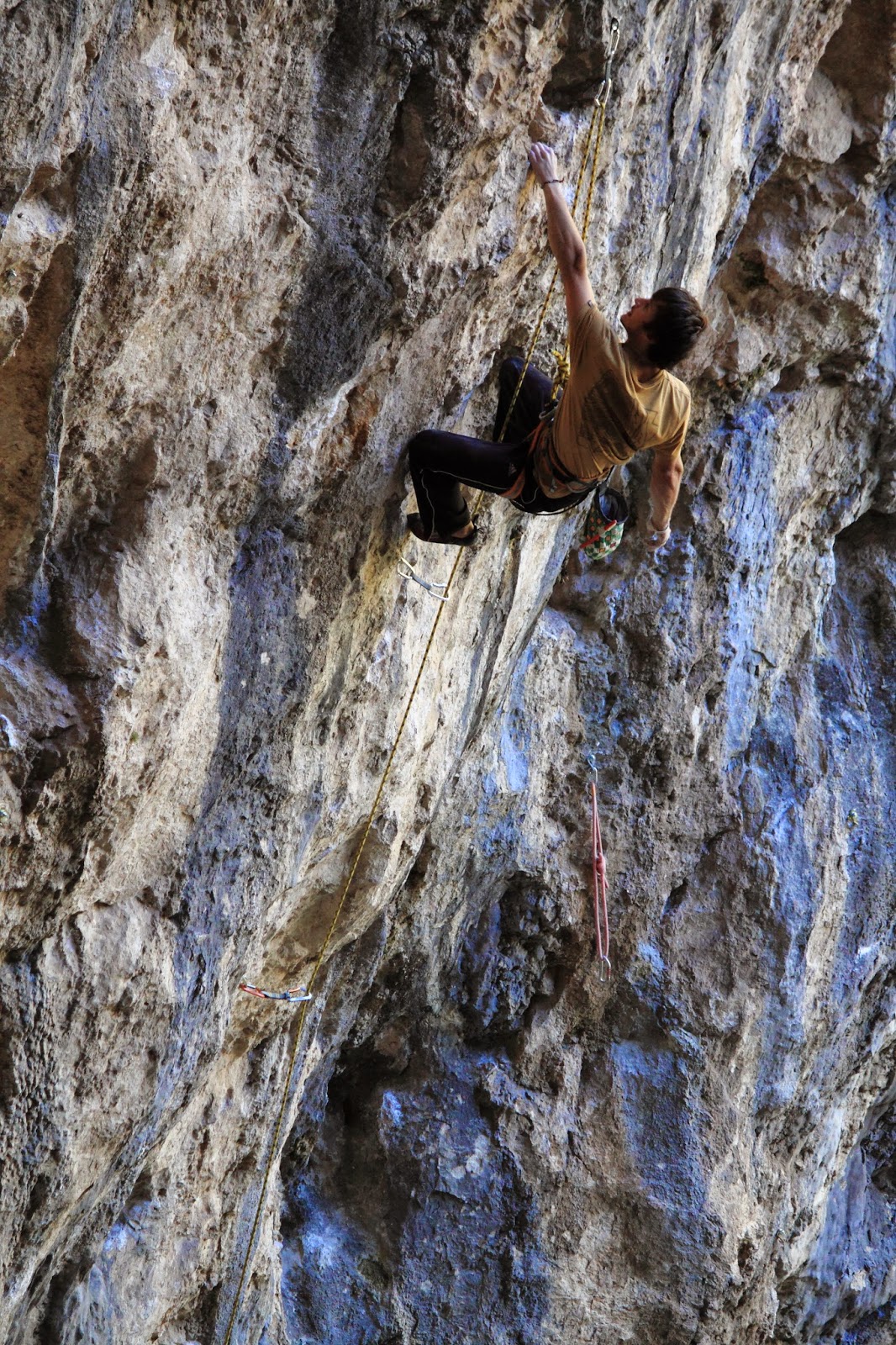 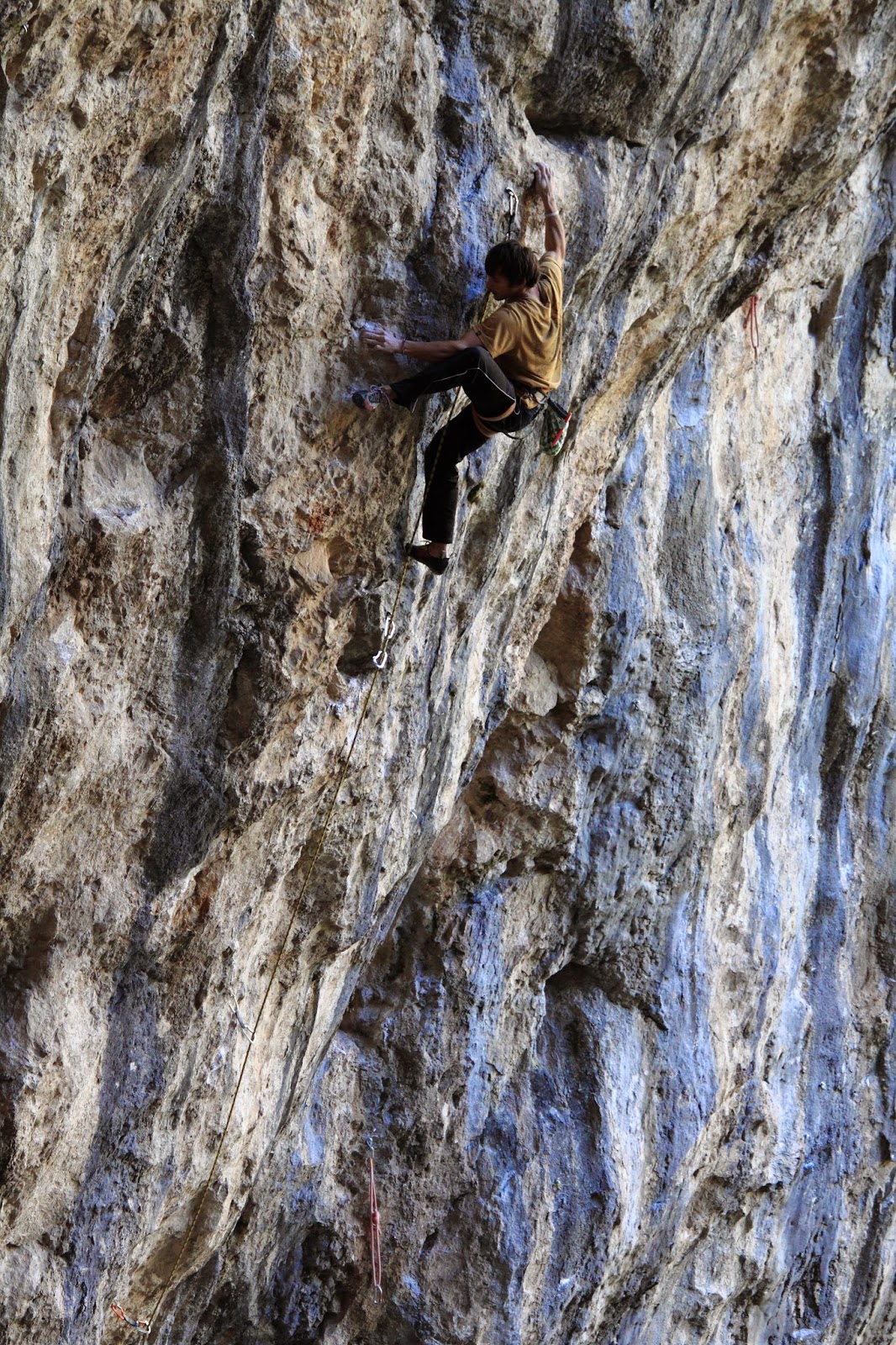 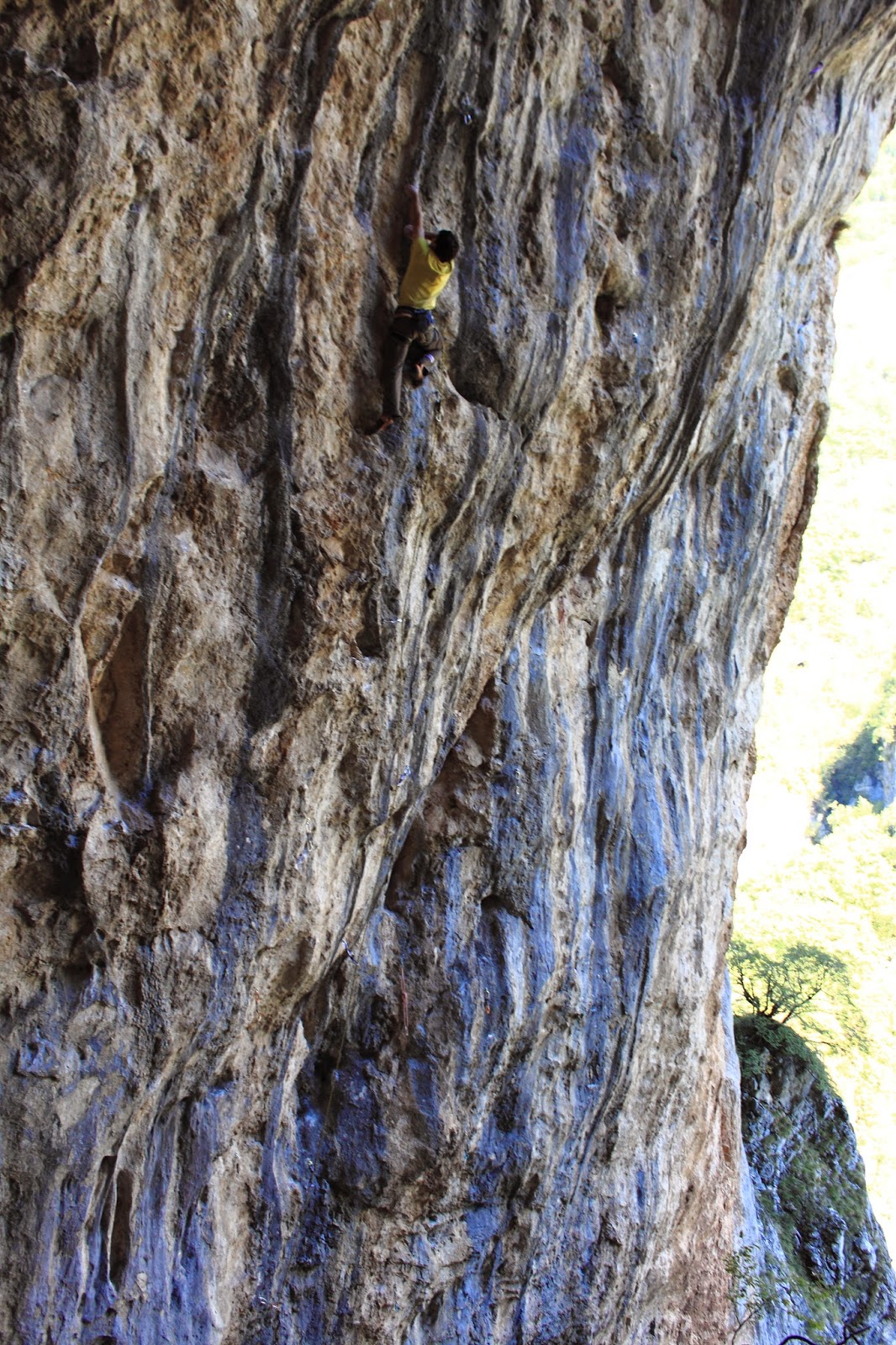 We didn't send anything notable but it was fun trying all the routes without knowing what grades they are or their names. Everyone tried a route and then we compared what we would grade the climbs.

We split the journey back, took the opportunity and stopped in Niš to visit Slobodan Gejo and his wife Vesna and taste some climbing in Serbia. Everybody knows Slobodan, he's the father of Staša who is a very successful comp climber and a good friend of ours. They made our short stay very pleasant and memorable. They live right at the entry to the small canyon called Jelašnica which holds some of the best of Serbia's sport climbing. It is nice mostly vertical, grey limestone climbing in a miniature-Verdonesque setting. The day we climbed here was perfect, cloudy with a slight breeze. The leaves are changing colours and we enjoyed climbing in the smell of early autumn. 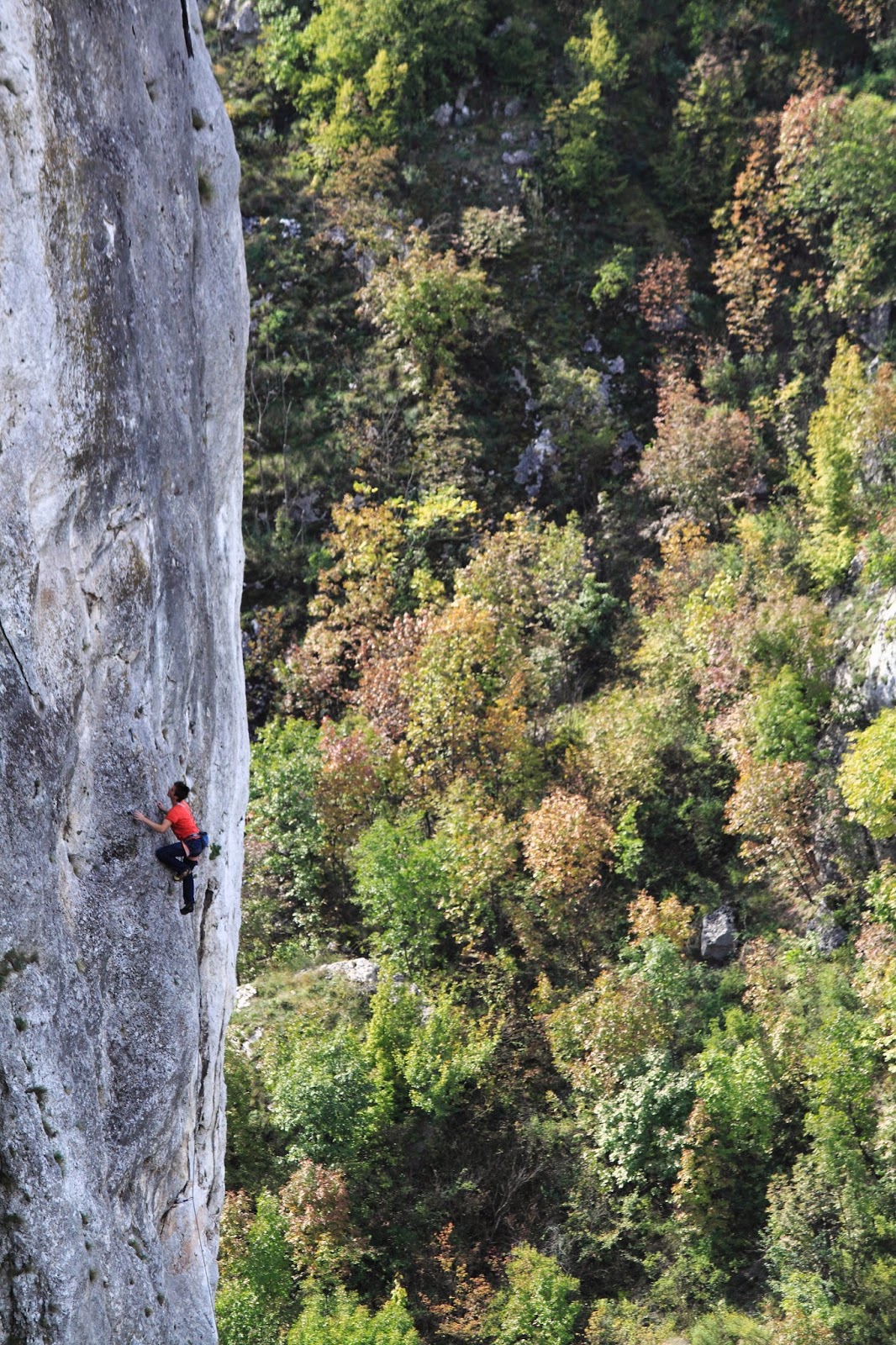 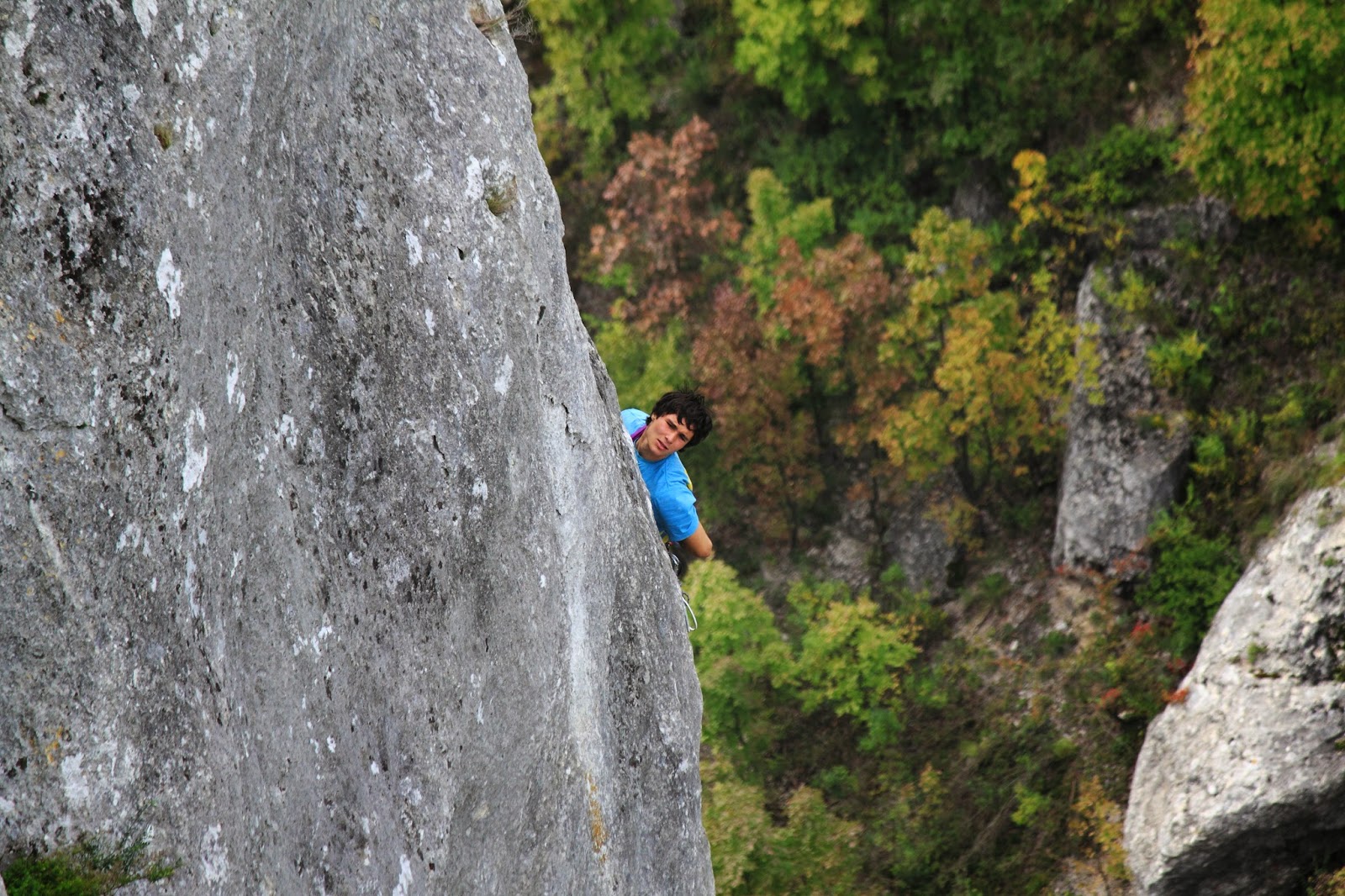 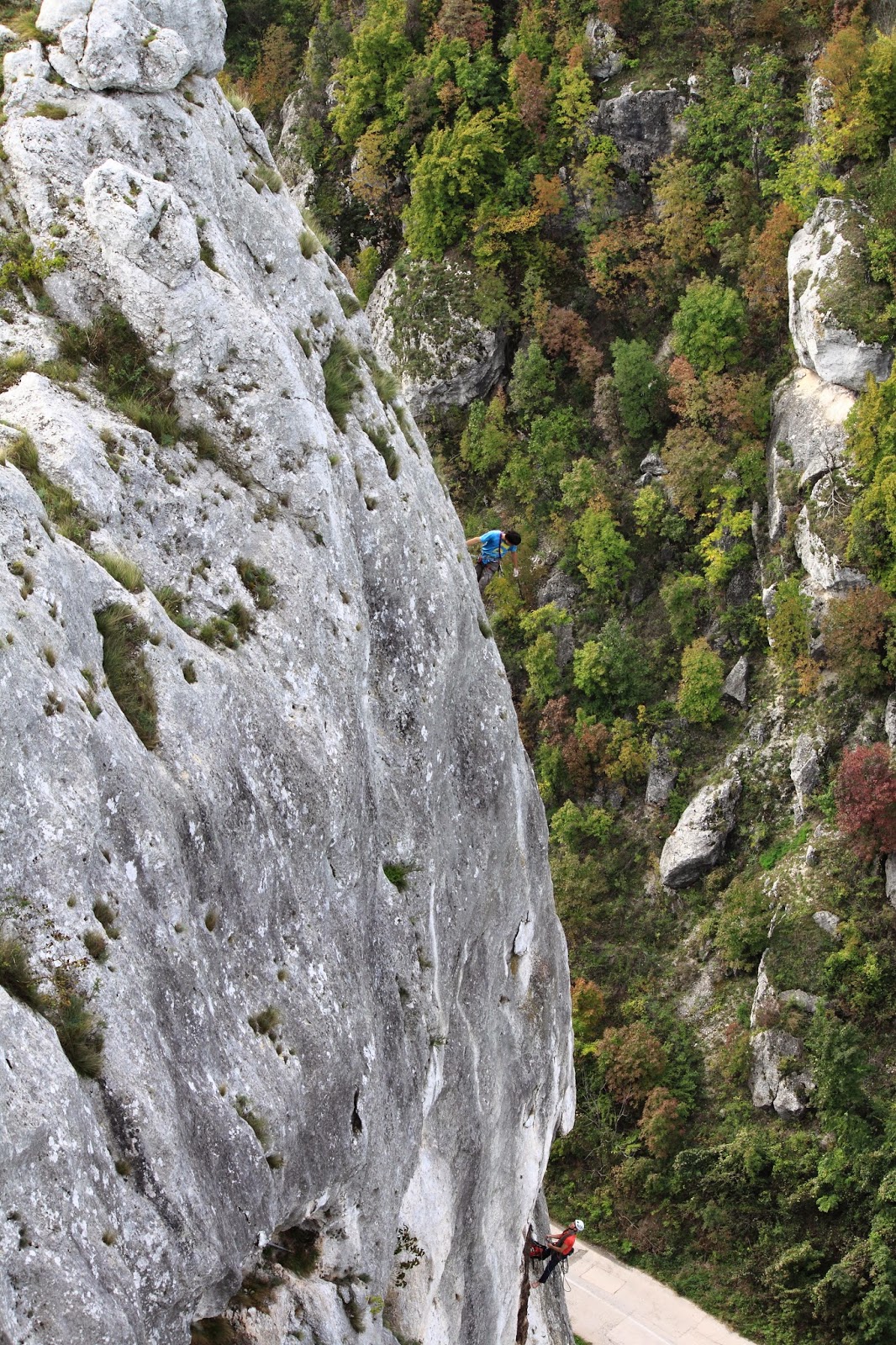 Me and Jakob had a gentle warm-up on Mono-lit, a 100m 7a max multipitch leading up a face which is literally 500metres away from Slobodan's house.
Later we repeated the testpiece "Starscream" 8a+ and made friends with some Belgrade climbers. In the evening we ate pasulj, drank rakija and listened to Slobodan's incredible stories from Africa and Himalaya. Having summitted Everest and as a local climbing legend, he has many up his sleeve... 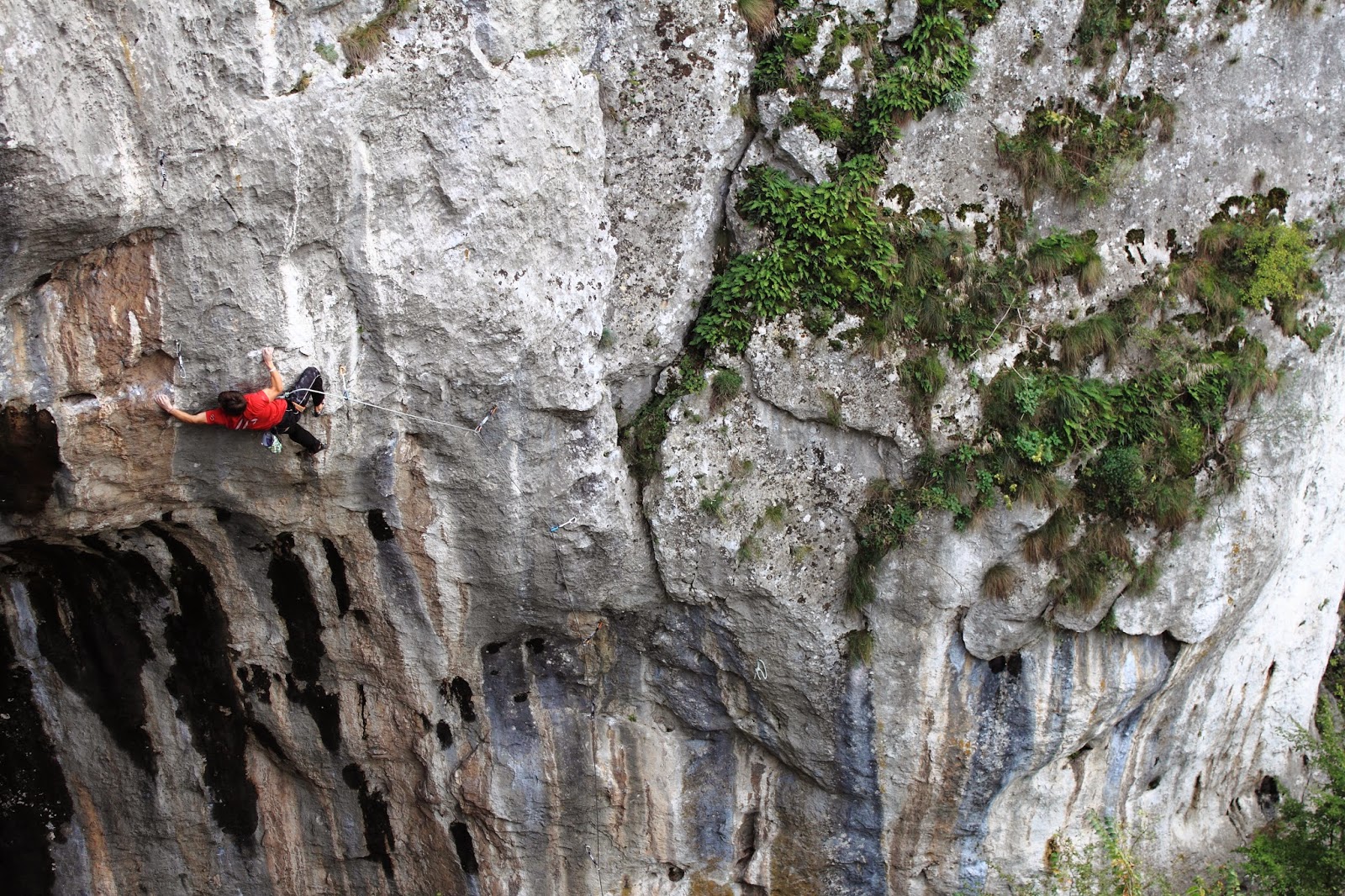 Many thanks to Slobodan and Vesna for their true hospitality! It was a cherry on top after the whole trip. 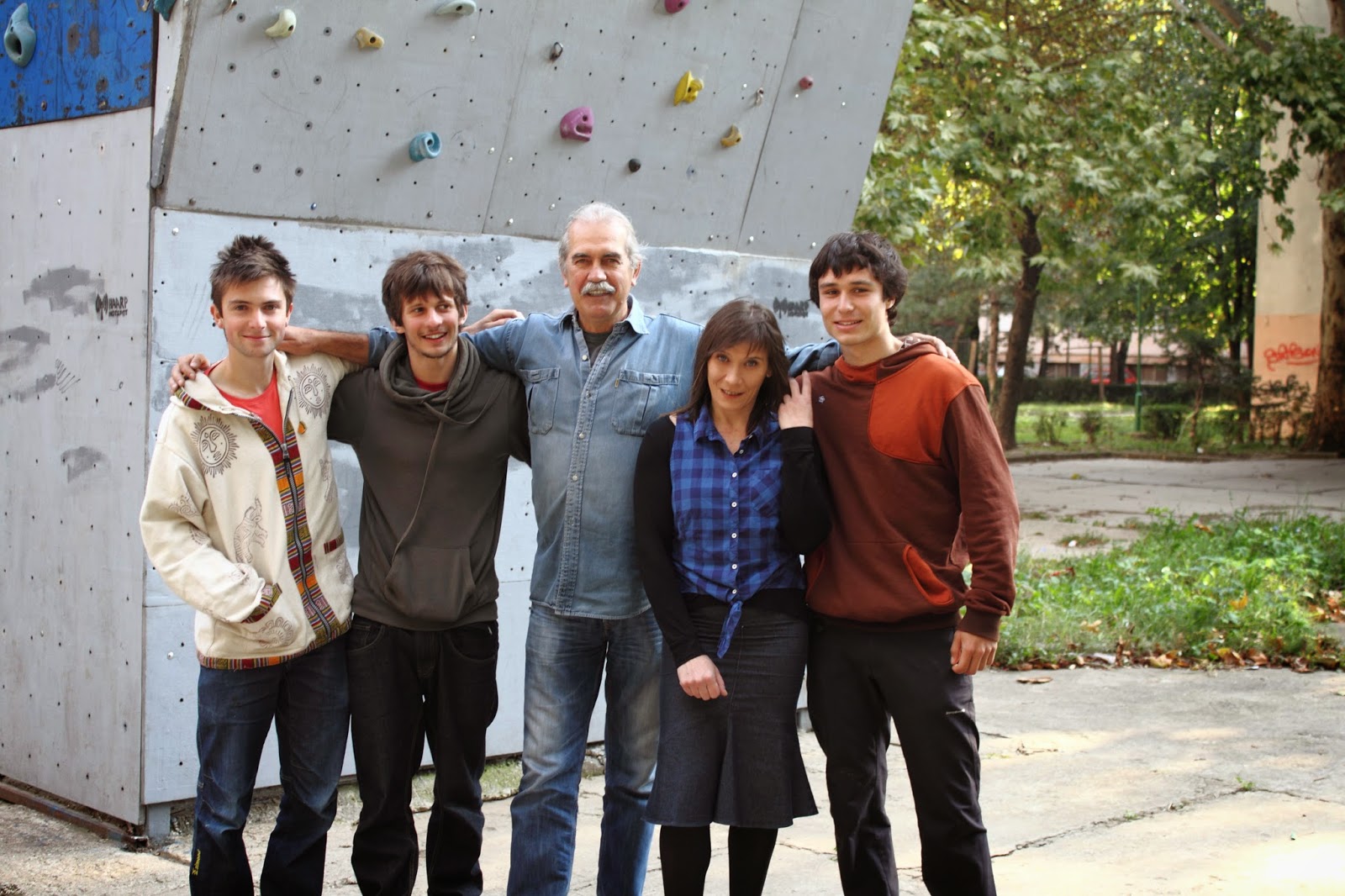 Besides that shout out to Izi and Jakob for coming along on this great trip!
To Petzl for making it all come alive! I wish I take part in another Roctrip one day :) the trip shows the true face of the people involved in the company. It (and the climbing community) is still small enough that the people in charge of everything are at the same time people who are the most passionate about their sport, and at the Roctrip everyone comes together like a big family.
To everyone joining the trip who I met, and especially to the BELGIAN team you crazy nutters :)
and Miha Jarm and Joži Pavlič who are followin the trip all the way to Antalya, read about their adventure here.
To Klemzi, Tanja, Pope for dinners and some good times spent hanging out in Mavrovo.
To Treking šport, the Petzl retailer in Slovenia who supported us and allowed us to take part in the trip.
To Iglu šport who has supported me with some La Sportivas :)
Posted by Gašper Pintar at 11:16 PM